Boombox Social is Kinkaider's Vibrant Ode to the 80s and 90s


Leave the DeLorean at home. 80s jams, a vintage arcade, made-from-scratch pizza, and a huge selection of local brews and kegged cocktails are right on P street. 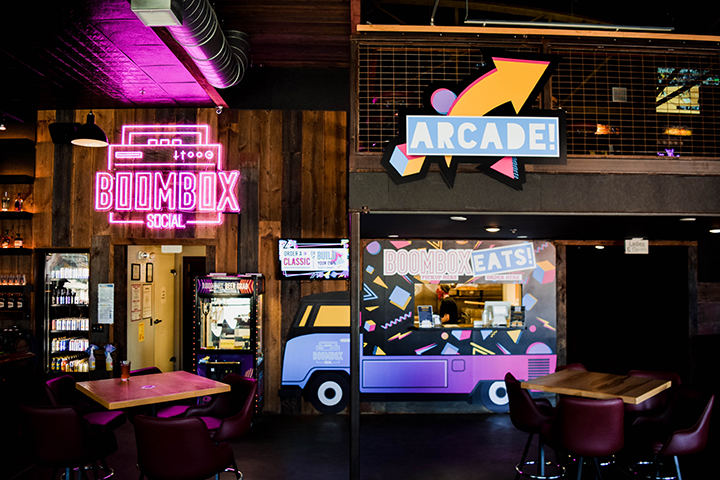 After some big success and expansion in the past five years, Nebraska’s Kinkaider Brewing is taking their business in a whole new direction: back in time.

Boombox Social officially (and cautiously) opened their doors on May 11 after holding off a month due to COVID-19 concerns. The new bar, pizza joint, arcade, and soon-to-be distillery is located in the large building at 1630 P Street that has formerly housed Ploughshare and Green Flash.

Take a stroll past, and you might do a double take. The space has transformed with neon lighting and vintage video game imagery, bar seating that opens up to the street via garage-style doors, and, of course, “Take on Me” playing over the speakers.

Step inside, and you’ll find a space that’s a complete ode to the 80s and 90s. No need for the DeLorean.

“The 80s and 90s were my childhood,” owner Cody Schmick said. “I'm 36 years old. But I love the resurgence of that kind of stuff. With ‘It’ being remade, and ‘Stranger Things,’ and that kind of nostalgic feel. This appeals to the younger generation because the fashion, movies, and music of the 80s and 90s are coming full circle. But then it also appeals to guys and gals my age because it's nostalgic for us. It's a little risky, but we had so much fun building the brand. We didn't take it too seriously.”

Along with funky, bright design elements that scream “Saved by the Bell,” Boombox Social has a faux food truck, walk-up window where you can order gourmet pizza with names like “Smells Like Taco Spirit” as well as fried sides and loaded “totchos” (tater tots + nachos.) It’ll stay open until 2 a.m. every night.

In the building’s large lofted area, the team decided to opt for a throwback arcade rather than extra seating. Local arcade vendors VVS jumped on the project to help. 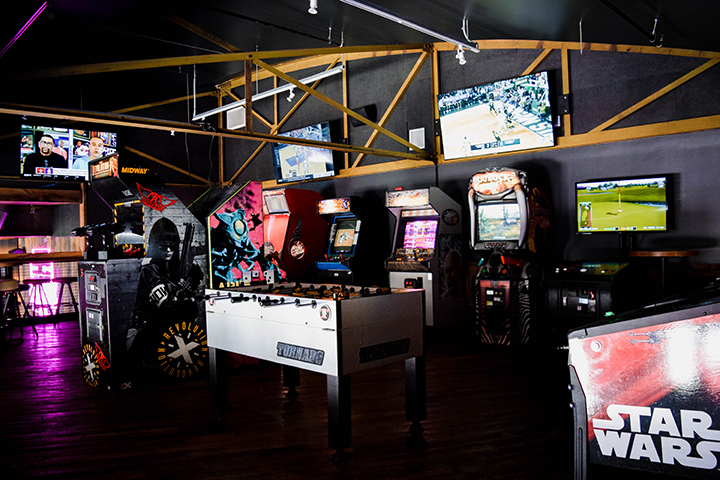 “We wanted to do something totally different with that loft,” Schmick said. “Because obviously this is a big space, we have plenty of room. There's a certain group of people, when they drink they have to do something physical. We wanted something to appeal to them.”

Boombox Social’s sprawling space and successful opening amid COVID-19 is a clear representation of Kinkaider’s ever-growing success as a Nebraska brewery.

Schmick opened the original Kinkaider Brewery just outside of Broken Bow in 2014 with brewmaster Dan Hodges and was joined by Nate Bell and Barry Fox. In the past few years, the company expanded to locations in Grand Island and the Lincoln Haymarket District.

Their success as a brewery and restaurant ownership group led them to their next venture: creating Lincoln’s first distillery. While Boombox Social was an opportunity to try out a fun concept with a college crowd appeal, the team was after the large production backroom to launch Sideshow Spirits.

“We wanted this front side to have a little bit more of a broad appeal,” Schmick said. “But the backside of the arcade is going to have a secret door that you go through into The Sideshow Cocktail Lounge. It's going to be super high end, and have a little bit of a different drink menu. But people will be able to flow between the two spaces, too.”

The team hopes to have the lounge open by fall, along with an operating production room to distribute their product across the state. The focus will be rum, vodka, whiskey, and gin, as well as liquears, canned cocktails, and kegged cocktails.

“We're setting ourselves up, equipment-wise, to be the biggest in the state, right out the gate, and Lincoln's first distillery for the time being,” Schmick said. “This building is about 11,000 sq ft, but every square foot is going to be used.” 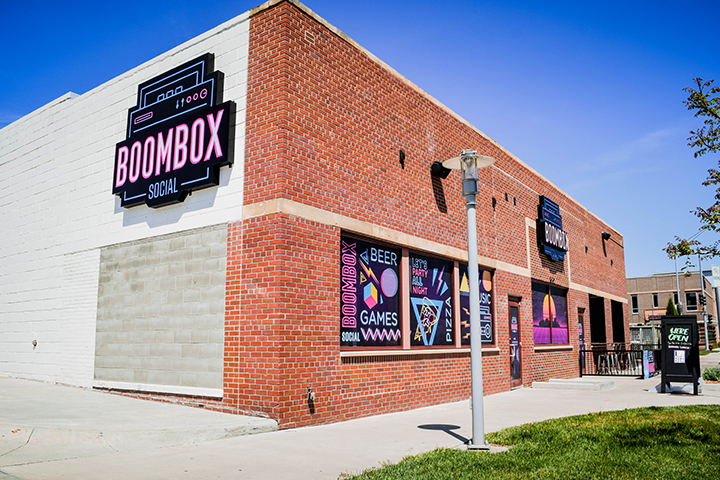 “We have some really experienced bartenders that are putting together these cocktail recipes,” Schmick said. “They're twelve-ounce cocktails with all different funky, fun flavors. People are digging those. We'll end up having ten cocktails on tap all the time here, and then 22 beers on tap.”

Six to eight of the tapped beers will be from Kinkaider, but the rest will be a rotating menu of beers from Nebraska and national breweries.

“We're fans of so many breweries that it's going to be super easy to keep those full and rotating,” Schmick said.

While COVID-19 pushed back the timeline for Boombox Social’s opening, Schmick said the team took the extra time to prepare in their stride. The team has been careful to operate at half capacity with all employees wearing a mask.

“We feel organized and ready to take on what's next,” he said. “And training for COVID was another thing that we had to put into place. We had three days of training here with our staff and we tied that in, a good few hours focusing on what we're going to do, and how we're going to keep people safe. Our staff was super responsive to it.”

While times continue to be uncertain for the restaurant business, there is one thing Schmick definitely has an answer to: his favorite icons from the 80s and 90s.