Not much has changed inside Captain's Chair in its 65 years of business. 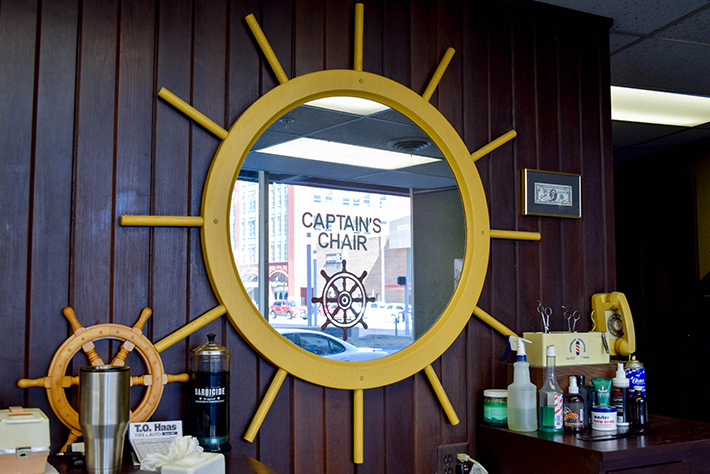 There was a remodel in the late '60s, a name change from Bob's Barbershop to Captain's Chair and, of course, the numerous hairstyle trends which came and went.

There have only been nine barbers to work at Captain's Chair in all its years of business. These days, co-owners Ryan Amen, son of the former owner, and Gary Haun, Ryan's brother-in-law are the sole two barbers to work in the shop. Haun has been there since 1996, Ryan since 2006.

The newest item in the shop might be its digital clock.

What has changed is the outside scenery of the surrounding downtown area.

"I had the privilege of working with my father-in-law who started in '66," Haun said. " I got to hear a lot of stories about how things were before I got here. Then I've been here for almost 22 years. There hasn't been a year since I've been here in this shop that there hasn't been some construction on P Street. Whether it was the Embassy Suites going in, whether it was the movie theaters changing, the plaza going in. I was here when it went two-way for two weeks. The modern day P Street, I've seen everything occur. Back in the day, P street used to just be the dive street of Downtown Lincoln.. It's all just come up around us, it's been kind of a nice evolution."

Haun said the store feels like it's had its own special relationship with its location, even heralding Tower Square's illuminating sculpture as "the postmodern barber pole."

The Captain's Chair received its name from former owner Jerry Amen, who served in the Navy. Formerly called Bob's Barbershop, named after the original owner of the shop, Jerry decided to remodel the shop and change its name.

Haun said the name works especially because the guy sitting in the chair is the captain and the barbers are there to do as he pleases.

Decades of service had allowed for a unique relationship between the two barbers and their customers. Ryan said the shop had two customers who have been coming to the Captain's Chair for the full 65 years and the shop had served four generations of one family.

"Here, customers can come in and say, 'I want the usual.' And we know what that is," Ryan said.

Haun said over time, customers become friends and it's common for barbers to hear intimate details from a person's life.

"If you open your ears, barbers and bartenders tend to get a lot of interesting stories from people, especially if you're allowing someone to hold sharp objects close to your head, Haun said. "You learn over time that as a barber, your reputation goes a long way. I always say Vegas stole this, because whatever happens, or is said, in the barber shop, stays in the barber shop."

Throughout it's 65 years, the Captain's Chair has seen many hairstyle trends over the years; from Beatles mop tops to flat tops. Still, Haun said the key to a long lasting successful business is never wavering on customer service and acceptance.

"Hairstyles come and go, hairstyles get really long, we had the Justin Bieber look for a while," Haun said. "Then things got real short, flat tops come and go, you get the bowl cuts. That's a fad I'm glad is gone. The other beauty about being in this business is I learn something new everyday because you get an opportunity to talk to so many different people from so many different backgrounds. We don't discriminate against anybody. Every man puts his pants on one leg at a time. If you walk-in, we'll take you. If you have an appointment, we'll take you. Appointments take priority over walk-ins but we don't discriminate against anybody based on their socioeconomic background at all. Everybody gets treated exactly the same."