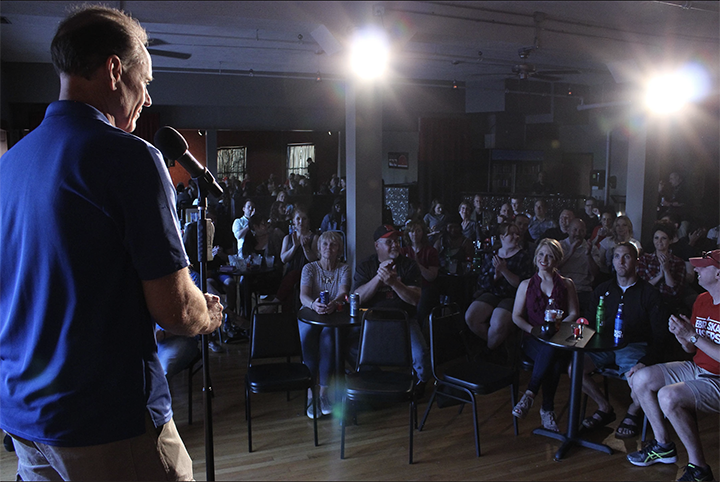 The Comedy Loft in downtown Lincoln, NE will celebrate its one-year anniversary on the weekend of April 12-13 with special guest comic magician Derek Hughes from America’s Got Talent.

Created a year ago on the second floor of The Creamery Building in Lincoln, Nebraska’s Historic Haymarket District, The Comedy Loft has quickly built a solid reputation on the national circuit, bringing many top headliners to Lincoln who have been seen on Netflix, Comedy Central and other national television programs. During its last round of booking, The Comedy Loft was contacted by some of the largest agencies in the United States.

“This usually takes clubs years to do,” The Comedy Loft's Juli Burney said. “This club is bringing many people to our city. Not only the comics but people who come here to see them. It also allows an entertainment outlet that we have not had since 1994. A city of our size deserves to have a comedy club like this.”

Several notable acts have also stopped in for special appearances during The Comedy Loft’s first year, including Preacher Lawson, a recent finalist on America’s Got Talent: The Champions, and Larry The Cable Guy, who performed two guest sets at The Comedy Loft, his first at any club in seventeen years.

Derek Hughes will perform four shows the weekend of April 12-13 at 7:30 pm and 9:30 pm.  A top ten finalist on America’s Got Talent, Derek combines stand-up comedy with magic. Hughes has performed his magic on MTV, VH1, Comedy Central, and the CW’s Penn & Teller: Fool Us. Also appearing will be comics Charlie Kojis and Tyler Walsh. Tickets can be reserved at www.comedyloft.club.

The Comedy Loft also announced more acts coming to the stage during the months of April-August. They include: Anthony DeVito, who has appeared on CBS’s The Late Show with Stephen Colbert and on Comedy Central Stand Up Presents: Anthony DeVito; Andy Erikson who placed in the top 5 on NBC’s Last Comic Standing and was on the television series Scream Queens on Fox; Lisa Best from The Late Late Show with James Corden; Michael Blaustein from MTV's Punk'd; Rocky LaPorte from The Tonight Show; Saturday Night Live writer Andrew Dismukes; and Josh Johnson, who is currently a writer on The Daily Show with Trevor Noah and has been featured on Kevin Hart’s Hart of the City. A complete list of all upcoming acts can be found at www.comedyloft.club.

The Comedy Loft is located on the second floor of The Creamery Building in the Historic Haymarket at 701 P Street, Lincoln, Nebraska. The Comedy Loft patrons may also reserve VIP parking from Park and Go ahead of time by calling 441-PARK.