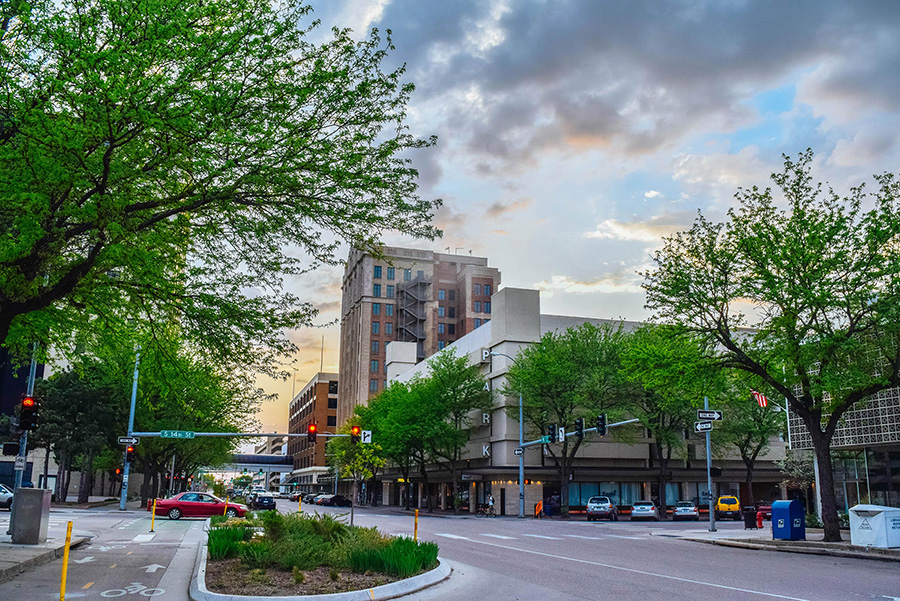 In 100 degree weather, a walk in downtown Lincoln can still be made in the shade.

It’s not an accident: downtown is one of the largest regional urban arboretums in the Midwest. The nearly 1,200 trees and 97 different species in the area are carefully identified in order to gain certification as one.

The Nebraska Statewide Arboretum is made up of more than 100 arboretum sites in 55 different communities. There are six accredited arboretums in Lincoln alone, and downtown has been one for around 10 years. It consists of 90 square blocks of urban sidewalk planting beds.

Downtown’s arboretum shares data with the prestigious Morton Arboretum in Illinois as well as ArbNet, the international database of trees. It is the first arboretum in Nebraska to be recognized by the digital organization. Downtown’s trees are researched on the basis of annual growth, plant health and survivability in an urban setting.

As a well-known arboretum, downtown Lincoln can share research and advice with other Nebraska arboretums, as well as educate the public with events like the statewide Arboretum Adventure. Kids become “arboretum explorers” by following clues in a printable guidebook to the plaque located on 13th and P, where they can make a rubbing with a pencil to add to their collection. The plaques are located at arboretums across Nebraska.

Downtown’s trees provide shade in the summer and break up the wind in the winter, saving tenants 10-15% percent on heating and air conditioning.

“It’s easier to walk down a street that has a canopy on it rather than going down a street with nothing but concrete,” he said. “It’s the idea of people and trees interacting.”

When Pinkerton first began overseeing the landscape downtown, there were only seven or eight genus, or “families” of tree species. Now there are 34 genus.

The greater the diversity, the less likely any single event will cause a catastrophe.

Currently, emerald ash borer (EAB) poses a threat to all ash trees in the area. It is an exotic beetle whose larvae feed on the inner bark of ash trees, preventing them from taking in water and nutrients from the soil. As of May 2018, it has been found in 33 states, including Nebraska.

Although downtown Lincoln’s ash trees have not been effected yet, Pinkerton said there’s a high probability the bug is in Lincoln. Because of downtown’s biodiversity, ash only makes up about 10% of the tree population—but that is still nearly 100 trees, many of them located down “O” street.

“It usually takes about six years for the numbers to get built up high enough where we really start seeing the damage,” Pinkerton said.

If the time comes, he said they will try to plant new trees close by any ash that need to be cut down. In the meantime, downtown Lincoln’s arborists are continuing to try to expand the diversity of the tree population—with hickory, Turkish filbert and Buckeye trees, to name a few—so that the streets can remain lush and shaded even when one species is greatly affected.

Maintaining downtown’s arboretum isn’t easy, and bugs aren’t the only thing causing harm to the trees.

“There’s damage from construction, car accidents and there’s a little bit of vandalism,” downtown Lincoln maintenance manager Brian Munk said. “Being in an urban, streetscape setting opens up more possibilities of that happening than in a park-like setting.”

Since downtown’s trees are surrounded by concrete, there is also a microclimate that the maintenance crew has to manage.

“There might be trees with green leaves on them in November when we’re having an Indian summer, so to speak, and all of a sudden we go from a 60 degree day to a 20 degree day,” Munk said. “And that’s a pretty hard shock on the tree.”

The space to plant downtown is sometimes limited, as well, and the soil can be a mix of street waste, concrete blocks and clay—not an ideal growing environment for a tree.

“Years ago they put in a tree and put some dirt around it and hoped it grew,” Pinkerton said. “But these new developments are very, very particular about how to structure the soil and bioswales for the plants. The plants do much better now in the type of situation versus taking street waste and making a planter out of it.”

Despite the obstacles, Pinkerton, Munk and their maintenance crew work daily to ensure downtown Lincoln will enjoy its trees for years to come.