Inside is an eclectic treasure trove of art pieces for just about everyone. 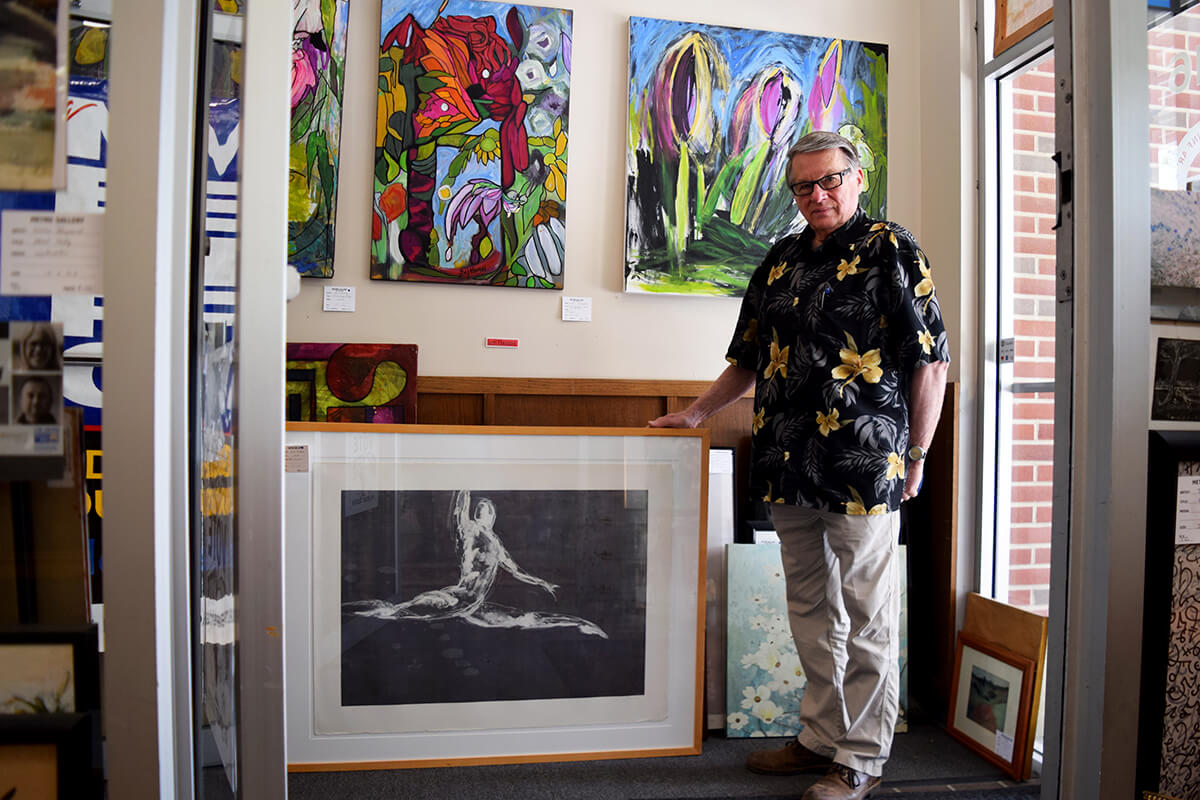 In 2011, Dean Settle retired after serving for 14 years as director of Community Mental Health Center in Lincoln when he learned that the center would be losing its public funding.

Settle was 72 at the time and had devoted 51 years to the mental health field. To see the collective memory of the center gone, which had served an average 5,000 patients and operated 43 programs, was devastating to him.

Settle and his wife went out to dinner that night to reflect upon his long career over a bottle of wine. Inevitably, the conversation drifted toward, “what next?” And, more importantly, “what are you going to do with all the art at the office?”

“I had art up and down the hallways to my office,” Settle said. “And anybody who worked for me, if they wanted art for their office, I would give them art—I had too much.”

Although not an artist himself, Settle had begun collecting art as a sophomore in college while studying psychology, and later, community rehabilitation administration. Throughout his adult life, any disposable income usually went to art—including a large amount created by people living with mental illness, which Settle calls “Outsider Art.”

“I love visual stimulation,” Settle said. “And then I married a collector.”

Their home is decorated with paintings, hung salon style, from floor to ceiling.

However, Settle wasn’t inclined to put any of his retirement budget toward storage for all of his art that was hanging at the center.

In a week, the wheels were in motion to open Metro Gallery right next to Settle’s favorite framing shop at 13th and N streets in downtown Lincoln.

Metro Gallery is now in its eighth year, housing one of the largest, most eclectic art collections in Lincoln. 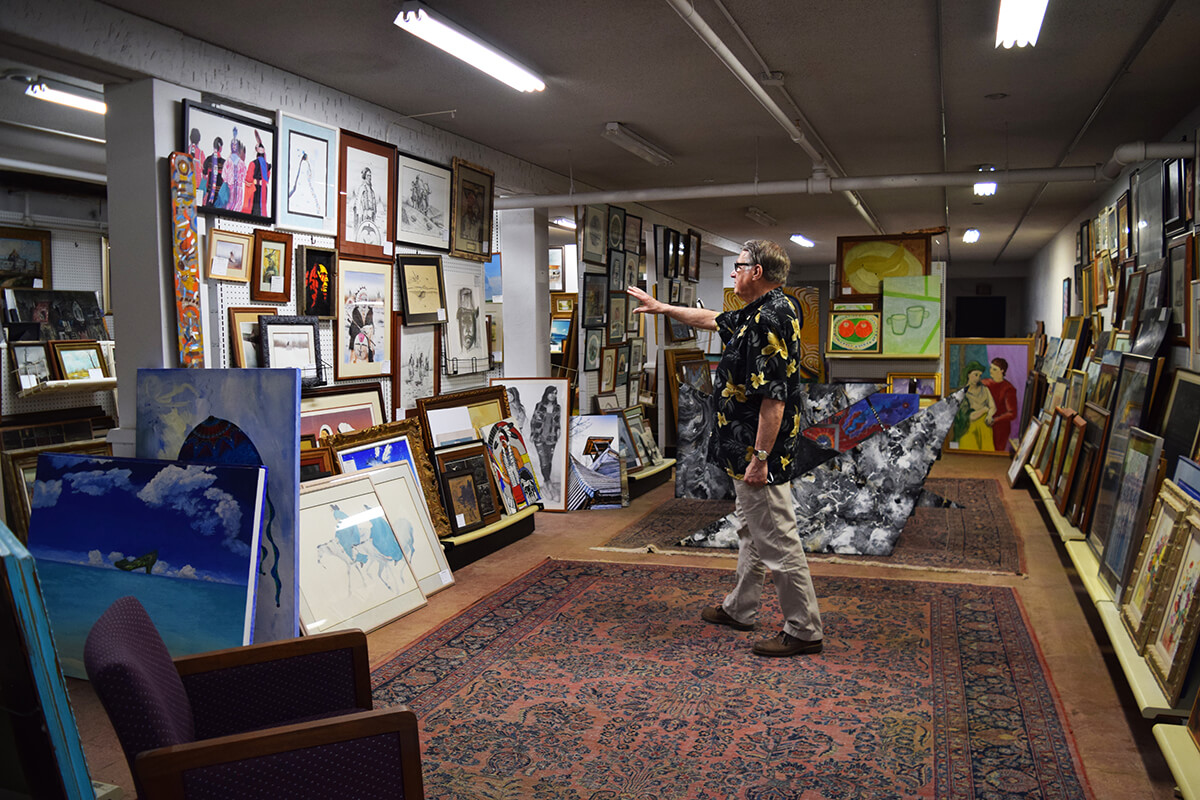 “Through the years, I've known so many artists and l liked their backgrounds and their stories,” Settle said. “And I've set up show after show—I've probably curated hundreds of shows in my life.”

The downtown gallery is filled floor-to-ceiling with art, using former office spaces as feature galleries and a large basement area—formerly the Zoo Bar’s after-hours jazz club in the early 80s—to house a treasure trove of paintings and prints that Settle invites you to discover, touch, and even “try out” on your wall at home before purchase.

Apart from the gallery, Settle hangs art at League of Human Dignity, Fuse, Foundry, the Nebraska Club and several churches. He curated a show with art unique to Southeast Nebraska that hangs at the Lyceum restaurant and bookstore in Brownville, and he brings hundred-year-old pieces to the Burlington Antique Mall in the Lincoln Haymarket.

Settle’s collection ranges from antique to modern, street art. There’s Native American art and Black American art collections. Some is local and some came from across the sea—a woman living in Rome sent Settle an art show after God told her she should.

Today, Metro has up to 4,000 images in its database, of which Settle is the sole proprietor. While many pieces he has bought and others were consigned by customers looking to downsize, a number come from families liquidating estates.

“When grandpa dies, and the family picks what they want from the estate, they're not in the mood to have a yard sale,” Settle said. “They almost freeze. They won't give the art away, but they're not ready to part with it. So what do you do with it?”

Settle works with these families, picking out pieces to sell at Metro. If the art doesn’t sell in a year, he helps the family donate it to group homes serving people living with mental illness and disabilities.

“It’s worked really well,” Settle said. “Everybody thinks it's a good idea to keep the art moving and to ultimately place it somewhere where it will be beneficial in the community.”

Settle’s history working in the mental health field has had a major influence on his approach as a gallery owner and art collector.

While at Community Mental Health Center, Settle helped to create Artists on the Edge, a program that supports artists with mental illness by providing them with materials and a space to create. It exists today as a part of CenterPointe’s programming.

Settle’s collection of Outsider Art (which is sometimes also referred to as “Visionary Art”) covers the walls of his office, and he continues to accrue it whenever he travels.

“It's so unique, so unfiltered,” he said. “Each one has a story. When you think about it, a lot of major, major artists in our known history were persons with mental illness.”

After a steady climb in regular sales for the gallery over the past eight years, 2020 came and challenged the gallery in ways they never could have imagined.

Settle was already dealing with the construction of downtown Lincoln’s 14th and P parking garage, which severely decreased foot traffic in front of Metro Gallery, when the COVID-19 pandemic hit. 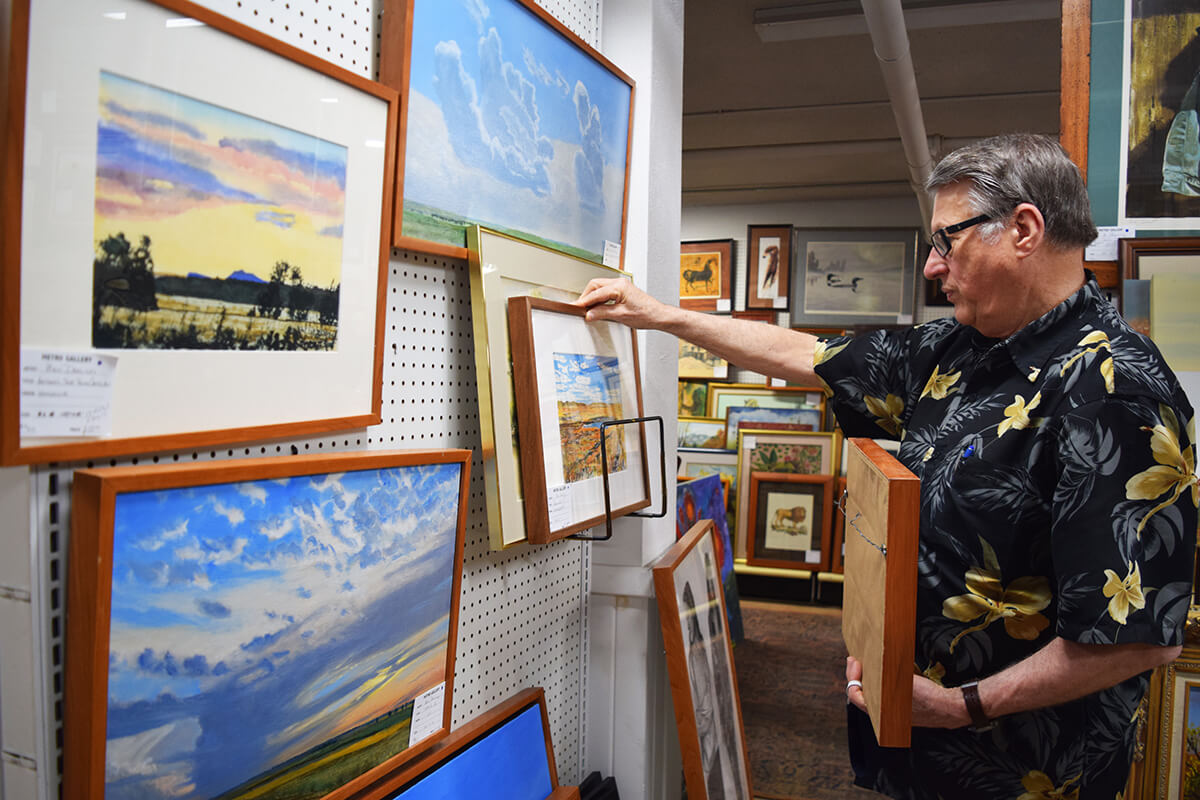 “We live and breathe on people finding us and walking through and making us their home gallery,” he said. “That's now much more difficult. Ninety percent of my income has fallen away.”

Pre-COVID, Settle worked to set up Metro 365, a weekly, online art auction to offset the decreased foot traffic for the gallery. By the time people were staying home, Settle had an online presence in place.

“It looks like I was a genius,” Settle said with a laugh.

Even with its challenges, opening Metro Gallery was a decision that has since brought Settle years of joy.

“This is a great place to live and work,” Settle said. “I like being surrounded by art. It's a great place even when there's no customers. I can sit here and read and listen to good jazz, and I'm happy. This is not a tough, awful job at all. I look forward to coming in.”

Between customers, Settle fills his time playing cribbage and reading two or three books a week as well as two or three newspapers a day to stay engaged with the community.

Settle said he believes it’s following his passion that has helped his aging.

“I can fool most people in town!” he said. “Nobody would guess I'm 81. My joke is, if I can't make it in this business I'm going to sit in a bar and have people guess my age, and I believe I can eat and drink for free.”