Hui Guo has seen and done it all when it comes to sushi.

Guo, originally from the city of Fuzhou in China, worked in over 20 restaurants across the United States as he made his way from sushi helper to sushi chef.

It was the natural next step for Guo who said he is always trying to better his position and tackle the next step in his career. Guo said mastering sushi is all about drive and passion. As prospective sushi chefs work their way up, the most intensive styles can take years to master.

"When learning how to be a sushi chef, in the beginning you're a sushi helper," Guo said. "There's not [a good] salary, but you learn how to make it. Then you need to find a job with a better title and a better salary. But it's always like that, right?" 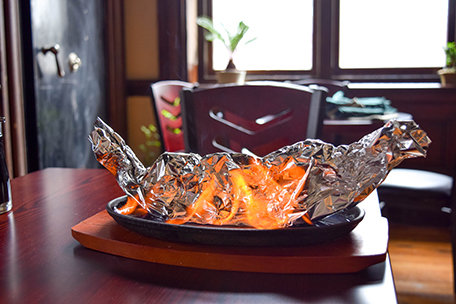 Since opening Grey Whale Sushi, Guo said he's kept in contact with his past employers and uses their resources to give his restaurant an edge. Grey Whale is one of the few restaurants in the US that uses whole tuna and black rice.

Guo's restaurant is a family affair. Both Guo and his wife work in the restaurant, while their daughter is often present inside as well.

He was inspired to open Grey Whale when his younger sister began school at the University of Nebraska-Lincoln two years ago. Guo said he wanted to open a downtown sushi restaurant with affordable prices and in a prime spot for students. He said he searched for two months for the right location, then spent another three to four months renovating the space in the Grand Manse.

"When I was a college student in China, [my wife] was my classmate and we were dating at the time," Guo said. "We wanted to try something new, something good but money was short. When you have money, you don't have time. When you're a college student, you have plenty of time but no money to try new things."

Grey Whale celebrated its grand opening on April 7 with deals on drinks and specialty rolls. In addition to sushi and sashimi, the restaurant also offers bento boxes, a variety of appetizers and cooked entrees such as fried rice.

The restaurant will continue to offer a happy hour at certain hours on Monday though Saturday and all day Sunday. As the cost of fish is on the rise, Guo said Grey Whale will keep their costs low, and he doesn't expect to see much fluctuation.