Earlier this Spring, Hudl staff and city leaders gathered in the West Haymarket to announce the firm’s plans to build a headquarters on Canopy Street. Hudl will partner with Speedway Properties, WRK LLC, and Chief Industries to develop its home office, which will be located on Canopy Street between P & Q, just two blocks south of the Pinnacle Bank Arena and across the street from Lincoln Station.

"Iconic companies deserve iconic spaces! With Hudl's choice to headquarter and grow here, we are executing on the original vision for the West Haymarket as a bold center for innovation and entertainment. Hudl is a dynamic company that represents the new reality in Lincoln, a City where the economic engine is no longer a combine, but a rocket ship!" --Will Scott, Principal of WRK LLC

Hudl is also partnering with one of its investors, Nelnet, which plans to use the building for additional growth, including the expansion of its software development team in Lincoln.

"Our associates could be located anywhere, but we are excited to be headquartered and growing in Downtown Lincoln.  Lincoln has been good to us, and we want to do our part to make it even better. Through our investments and job growth in Lincoln, we are helping to create a vibrant downtown community in which the best and brightest want to live here and pursue a rewarding career." --Jeff Noordhoek, Nelnet CEO

The plan for development is timely, as Hudl expects to add up to 300 new high-tech jobs over the next three years, 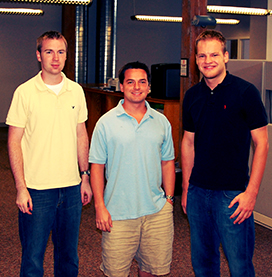 creating a need for a much larger footprint.  According to the University of Nebraska's Bureau of Business Research, the projected payroll and investment associated with this project will create an estimated $140 million of annual economic activity.

University of Nebraska-Lincoln graduates – David Graff, Brian Kaiser and John Wirtz started Hudl (then known as Agile Sports) in 2006 and moved to the Haymarket’s H.P Lau building in June 2007.  Since then, Hudl has become the fastest-growing private company in Nebraska for the last two years.  They have also made their mark downtown by and creating over 150 full-time "Hudlies" who currently office in the Salvation Army and Lincoln Fixture buildings. With more than 3.5 million users from 100,000 teams across 30 sports worldwide, Hudl is changing the way coaches, athletes, parents and fans find value in practice and game film.

"What we're most excited about in moving to the West Haymarket is how much it's grown just in the last couple of years. We host job candidates from every corner of the country, and all leave Lincoln with a new appreciation for the Midwest. Likewise, university graduates who moved away several years ago are amazed by the progress made in this area. The City's commitment to these developments has us proud to call Lincoln home and excited for the future of the West Haymarket." --David Graff, Hudl CEO