A Year in Review for Lincoln's First Bike Share Program 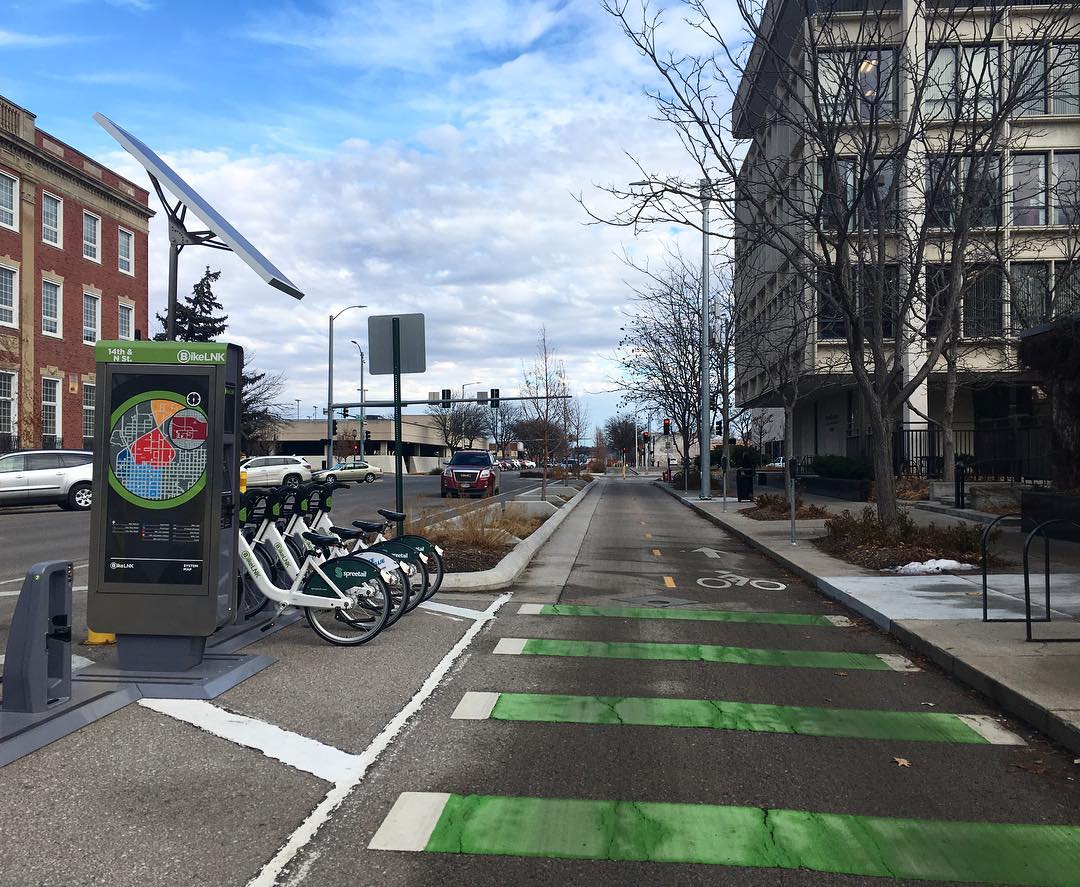 This feature is a part of an ongoing series highlighting DLA's 2018 Downtown Impact Award winners. The Impact Awards recognize businesses or individuals that have made a significant contribution to downtown Lincoln. Bike LNK was the recipient of the 2018 Business Leadership award.

28,000 trips. Eight and a half months of operation. Four years of planning.

In fact, Bike LNK saw more trips in 2018 than much larger cities’ bike share programs, like Kansas City and Memphis.

“It’s those things that make you realize why Lincoln is such a great place to be,” Bike LNK manager Jamie Granquist said. “And it’s only getting better.”

The idea for a downtown bike share program for Lincoln began in 2014 and was a student-led push from the Association of Students of the University of Nebraska (ASUN). ASUN pitched the program to the city planning department, was approved for funding from the Congestion Mitigation and Air Quality Improvement (CMAQ) Program, got a nod from city council, and Bike LNK was on its way to fruition. In September 2017, orders were placed for bikes and kiosks through the BCycle bike share company.

When a manager position for Bike LNK was posted, Granquist had been happily self-employed as a home childcare provider for the past 17 years. Although she was also a passionate cyclist, Granquist had never heard of a bike share program.

“I kept on being tagged in this Facebook post for the position,” Granquist said. “And I was like, ‘Guys, I love what I do!' I love kids. I think they're fun, I think they're interesting, everyday is different. But I kept getting tagged.”

Granquist finally appeased her friends by submitting an application. To prepare for her interview, she began researching bike share programs and how they would work in Lincoln.

“I'm a lifelong Lincoln resident,” Granquist said. “I love Lincoln, I know a lot about Lincoln, and I think Lincoln is going in the right direction with walkability and people, and just the laid-back yet connected vibe we have. The more I researched bike share to get ready for that interview, the more I was like, 'wow, this is really good move for Lincoln.'” 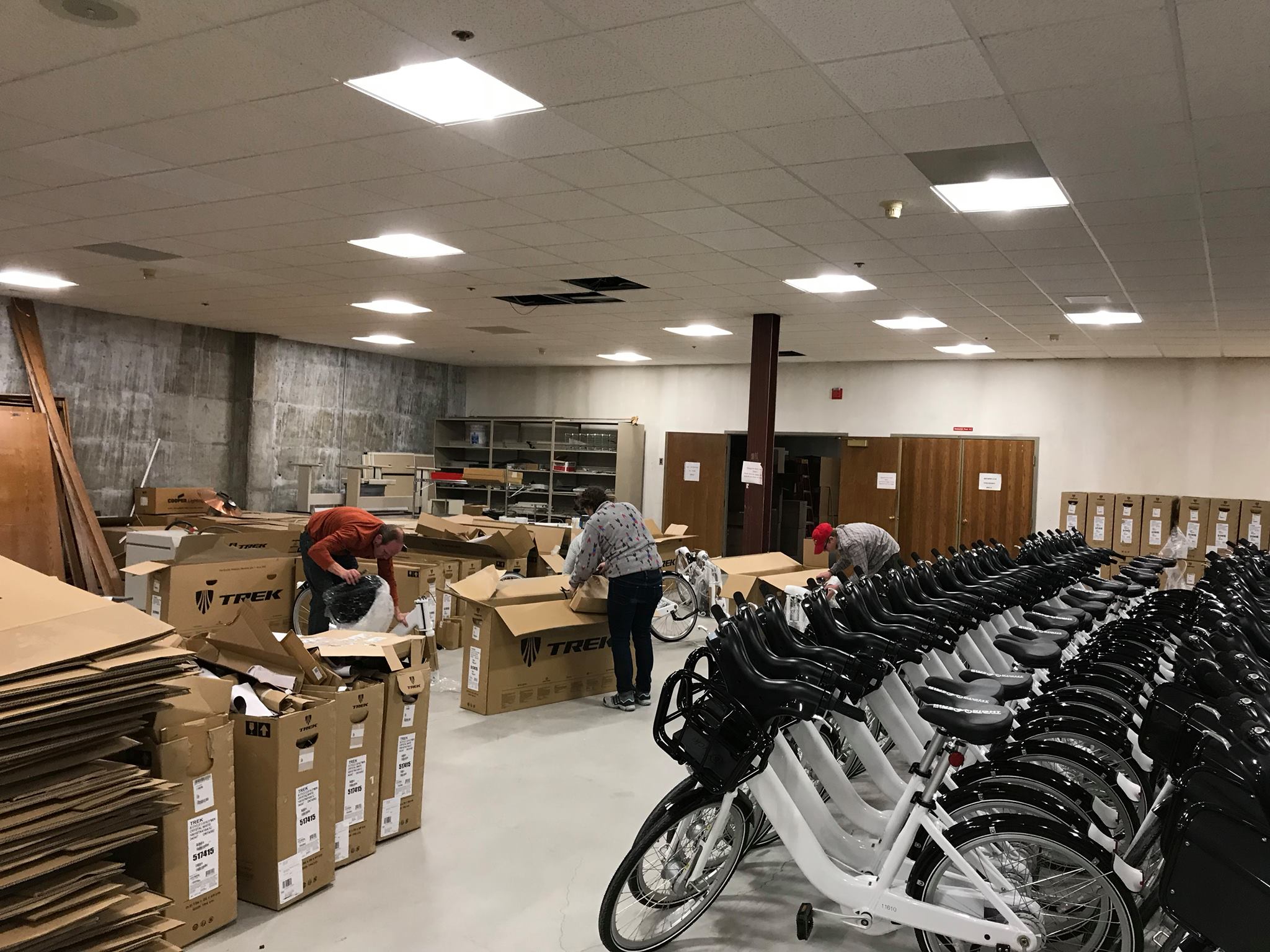 Granquist landed the job in February 2018 and hit the ground running with a small team planning the Bike LNK launch, working on building bikes, and getting 19 kiosks on the ground in downtown Lincoln and the UNL campus. The team shared a round table in a small office and built bikes in the basement of the municipal building at the Lincoln airport—100 bikes in one room take up a lot of space.

April 20, 2018 marked the official launch of Bike LNK with a ribbon cutting and celebration in the Railyard. The following two weeks saw 1,500 bike trips. In September, Bike LNK had a high of 5,300 trips.

“Everybody was pleasantly surprised about how well it did,” Granquist said.

Based off of other midwest bike share systems, the team was prepared for inclement weather to affect their numbers.

“In Madison, they said they saw their trips die off when it's too windy or too hot or too rainy,” Granquist said. “We have not seen that. What we have seen is really strong usage all the time. Most people call this the slow time of year, and yeah, it kind of is. But we still have about 100 trips a day right now. Even in December and January.”

At a company-wide convention that invited all cities using BCycle bike share systems, the Bike LNK team also was surprised to find that Lincoln’s daily traffic patterns were unusual.

Unlike other cities, Lincoln’s bike share experiences a fourth “bump” in numbers following the usual spikes in usage in the morning, at lunchtime, and for the commute home from work.

“That's because our downtown is so vibrant with the restaurants that we have, the music venues that we have, movie theaters, and bars,” Granquist said. “And so we see a fourth rise in our trips between 8 and 10 p.m. that other cities frankly don't see. It just really speaks to the great place that we live.”

Granquist said everyday since the launch has been a learning opportunity, and everyday is different. Her love for Lincoln and natural love of biking and road infrastructure has made the position a great fit, along with the whole Bike LNK team.

Now located in a building on South Antelope Parkway, the Bike LNK staff has a bike rack—and no need for a parking lot.

“We don't care about vehicle parking here,” Granquist said. “I went to drive my car the other day and it was dead because it had been three weeks since I drove it. We're all passionate about biking and the fact that you can make biking more than recreational.” 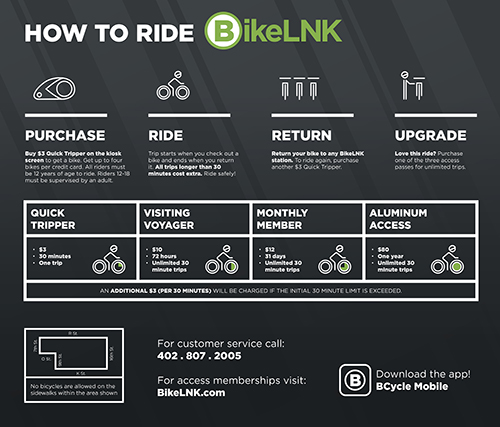 Granquist’s advice to people who are wanting to use the bike share program but are unsure of where to begin is to start small and make small goals.

“Maybe on a Thursday, just decide you’re going to park by the ball diamonds at Lincoln High, check out a bike from the kiosks at Nelnet, and ride the rest of the way to work,” she said. “It doesn't have to be these huge steps. It's small changes that add up to huge things.”

Bike LNK’s top user, Joe Huffman, started by simply checking out a bike to ride around during his lunch hour.

In 2019, Granquist said she hopes to see expansion to neighborhoods outside of downtown where people live, and improving the service in general based on feedback.

“Obviously you want more members, more riders, more carbon offset, more people out there riding,” she said. “We can't have kiosks on some of the busier streets, like O street, because it's a federal highway. So there's also rules about things like that that also make awareness more challenging. It's a work in progress. It's just learning from things that don't go well and then noticing things that do go well and spring-boarding off of them and making positive change.”

Granquist said she is proud to say that Bike LNK’s inaugural success in 2018 was a collaborative effort from a lot of passionate people.

“I think that really reflects the place that Lincoln is,” she said. “We just really work together, everybody's a friend—you give the finger wave off the steering wheel as you pass people. We just don't ever lose that.”

Learn more about Bike LNK and become a member at bikelnk.bcycle.com.