This weekend, wake up and smell the...Guinness?

Believe it or not, Guinness makes an excellent Saint Patrick’s Day substitute for milk along with your bowl of Lucky Charms. Just ask McKinney’s Irish Pub owner Nathan Stewart.

A Lucky Charms and Guinness eating contest is just one of the events going on at McKinney’s two-day Saint Patrick’s Day celebration starting the afternoon of Saturday, March 16.

“Surprisingly, the marshmallows sweeten up the Guinness a little bit,” Stewart said. “People who don’t usually like the taste of Guinness might find they like it this way,”

Since its opening in 2013, McKinney’s has become somewhat of a St. Patrick’s Day hotspot in downtown Lincoln.

The Haymarket Irish pub has been taking over the street for the holiday each year, adding more to the celebration each time.

Since Saint Patrick’s falls on a Sunday this year, McKinney’s is kicking off the festivities earlier than ever at 4 p.m. on Saturday with outdoor heated tents, one-man Irish band Richard Stripling, Irish dancers and plenty of giveaways and beer from Blue Blood Brewing Co., who makes McKinney’s own Irish Pub Ale. Irish band Crosby, Stills, Bangers and Mash (we can’t make this stuff up) will keep the party going until late.

The celebration continues on Sunday with more music and bagpipers, Lucky Charms-and-Guinness-eating and a full-on kilt runway show, where anyone 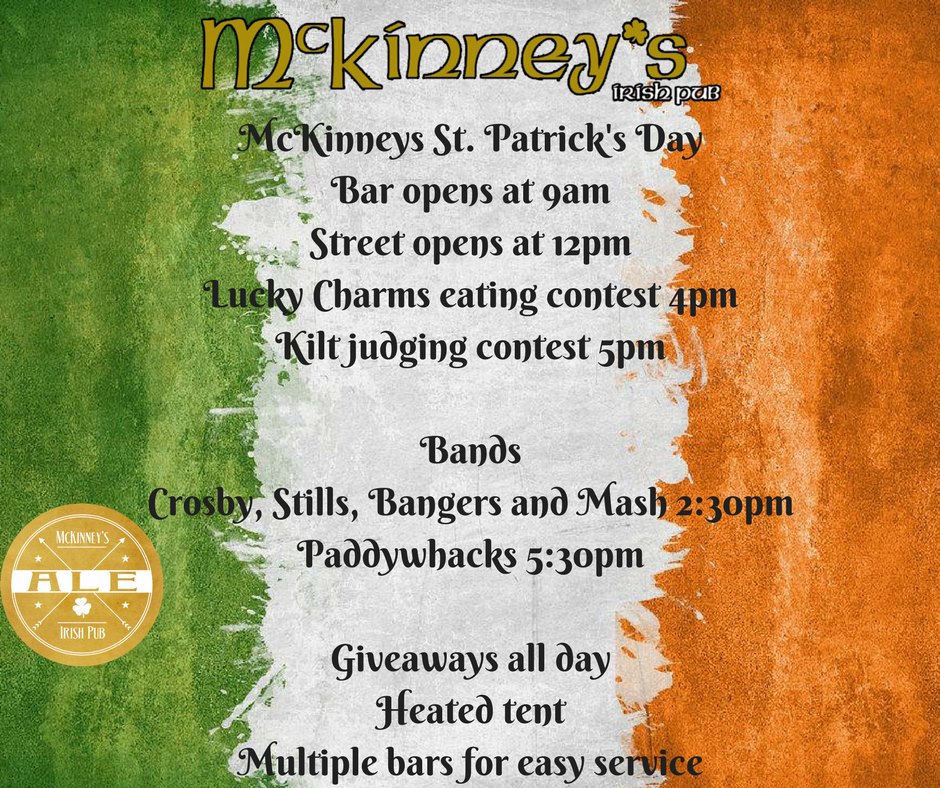 sporting one can strut their stuff to win a prize. The bar will open at 9 a.m. so you can start the day off right, and a limited kitchen menu will serve your Irish favorites (like bangers and mash, Irish stew and reuben sliders) all day.

“My family came from Ireland, so I’ve always drank in Irish pubs,” Stewart said. “I always loved the pub atmosphere. A pub appeals to everyone, it's not a certain demographic of person, it's not a certain age group. It's everyone. When people hear the word ‘pub,’ they think of a safe, fun, relaxed environment. And that's why we decided to open an Irish pub.”

McKinney’s isn’t just the place to be for Saint Patrick’s Day festivities, it’s also the year-round meeting place for Lincolnites who want to celebrate their Irish heritage. Lincoln’s division of the Ancient Order of Hibernians meets there once a month (“Hibernia” is the classical Latin name for Ireland, literally translating to “land of winter.”) You’ll find its group members wholeheartedly participating in Sunday’s kilt contest.

Stewart says people from Ireland who travel through Lincoln often find themselves at the pub, too.

“They want to stop here and see how authentic we are, and if we have the same beers and whiskeys that they would see at their traditional Irish pub in Ireland,” he said. “I think a lot of people who come from overseas are usually surprised about the amount of dollar bills on the wall. There's a lot of Irish pubs you can go to where they maybe put Guinness on tap and that's about it. But we have Kilkenny, Smithwick's, Bass, Murphy's Irish Stout, all the traditional stuff you see in Ireland.”

Whether you’re Irish or not, anyone is welcome at the all-day festivities this weekend in the Haymarket. McKinney’s staff just asks that you wear something under that kilt of yours.