Lincoln has long been a music city, filled with diverse genres and both intimate and big-scale shows.

With recent Lincoln Calling and other concert announcements, we decided to reach out to various venues in the downtown area and asked owners and booking agents a few questions about their favorite shows and hopes for the future.

1. What are some of your favorite shows you've brought to Vega?

There have been so many great shows, but my personal favorites are Temples, Unknown Mortal Orchestra, Young Fathers, Conor Oberst & The Felice Brothers, Cashmere Cat, Built To Spill, Guided By Voices, and Andrew W.K.

I have a very long wish list. But, a few bands I'd love to bring are Peter, Bjorn, & John, Blonde Redhead, The Faint, The Kills, The Strokes. Some of these artists wouldn't necessarily work at Vega - its capacity is too small - but I'd love to be a part of bringing them to Lincoln under the right circumstances.

We have Grammy winning alternative rockers Soul Asylum here in late July, and a great lineup of shows planned for the fall (most unannounced as of yet). There are definitely some artists/bands I'm extremely excited to be bringing to Lincoln.

Lincoln is lucky to have so many great venues, each filling a particular and needed niche in this market! Get out and support your local venues and bands! 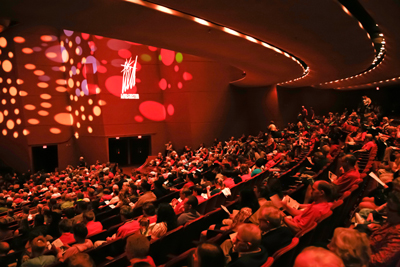 1. What are some of your favorite shows you've brought to the Lied Center?

Truly too many to count and it changes all of the time! During my three seasons at the Lied Center, there have been a handful of performances that really stuck with me though (and I still think about them often). Last season, the Russian National Orchestra’s performance with pianist Yuja Wang, Punch Brothers and the first national tour of A Gentleman's Guide to Love & Murder completely blew me away. In 2014, we had a remarkable revival of West Side Story and of course, I'll never forget being one of the fortunate few to hear Yo-Yo Ma performing Bach's Cello Suites on the Lied stage. Finally, and probably above all, Alvin Ailey American Dance Theater’s performance in 2015 changed my life forever.

Programming the Lied Center's season is a huge responsibility and I think our Executive and Artistic Directors (Bill Stephan and Ann Chang) do an incredible job of balancing a line-up of popular artists and smash Broadway shows with performances that challenge our patrons and broaden their artistic horizons. Ann and Bill are in constant communication with artist management and agents across the country to ensure that Nebraskans have access to the greatest artists in the world, season after season. I know they both have a long wishlist of artists they would like to see perform on the Lied Center stage including some of the biggest shows ever to grace the Broadway stage, and thanks to the support of UNL alumnus Glenn Korff, the Lied Center's Broadway program is getting bigger and better every year.

The Lied Center’s 16/17 season will kick off in September and there are so many things to be excited about. As I mentioned, the Glenn Korff Broadway Endowment has transformed Broadway at the Lied. This season, Broadway’s biggest superstar, Idina Menzel, is coming to the Lied Center and we have some of the most in-demand shows currently on tour. Personally, I am particularly excited about Once and the first national tour of Matilda the Musical. The Lied Center will also continue the tradition of bringing the finest orchestras in the world to Lincoln with Boston Pops performing a program of Gershwin and tunes made famous on the silver screen. I encourage Nebraskans to check out Sara Watkins and Gabriel Kahane, two artists that I am especially excited about this season. Both Watkins and Kahane are critically-acclaimed musicians and songwriters and one-of-a-kind talents. I promise you won't be disappointed!

1. What are some of your favorite shows you've brought to the The Single Barrel?

Thomas Rhett and The Turnpike Troubadours stand out to me...Thomas Rhett even gave a shout out last time he played at the PBA and Turnpike comes in for lunch or dinner every time they are in town.

3. What shows are coming up at The Single Barrel?

We haven't been ok'd to announce them quite yet but we have some newer Nashville bands and some of our old favorites...keep up to date at www.thesinglebarrel.com!

We love to see all the different music venues coming to downtown Lincoln...keeps us on our toes and gives me something to do when I'm not working! 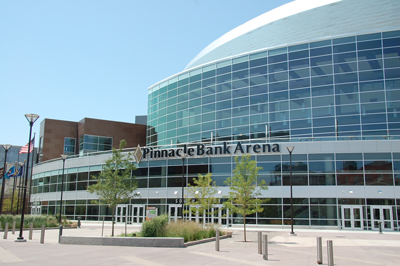 1. What are some of your favorite shows you've brought to the Pinnacle?

Tough to choose, at this level all of these artists are very good and their productions are outstanding.

Sir Paul McCartney. That was a legendary show. So iconic, such good music and he is an excellent musician and showman. Hearing his many songs live was a very special experience.

Neil Young. Neil has been a phenomenal songwriter and social commentator for so many years. And he is an outstanding guitarist. Pair up his talent and catalog of songs with Willie Nelson’s kid’s band and we had three-plus hours of guitar jam after guitar jam.

Eagles. Nobody does classic rock better than the Eagles. The recent passing of Glenn Frey makes their appearance here have a special meaning knowing that the Eagles aren’t likely to be touring any more.

Monster Jam. We weren’t able to do Monster Jam at Pershing because of the physical restrictions of the facility. Bringing that show here to families of Lincoln was a treat. It’s a very visual show, lots of noise and excitement and it was cool to have a family show that is just plain fun.

Some of these are still a possibility, Joni Mitchell won’t happen but it would have been a great show.

Lots of other great options, we’re working on those….

Cirque du Soleil: Toruk next week. Beautiful and stunning show. The production and artistry is amazing.

Maroon 5, James Valentine and the guys come home to Lincoln.

1. What are some of your favorite shows you've brought to the Bourbon?

This is a tough question. I learned early on that to be successful in the concert production world, I couldn't just book the show I want to see and be successful. I found that out the hard way on some of these. I got some pretty expensive t-shirts out of the deal (thats how I justify the loss). Some of my favorites out of a long line of shows I still can't believe I booked are:

If I could book anyone in the world for the Bourbon, I say it would have been Prince. But that little red corvette has driven on to greener pastures. Ya know, I think I'll leave it there and keep dreaming of that show as my dream show. The man is something the world will never see again.

We have a bunch of events in the works, none I can blow the lid off of just yet. But as far as shows at the Bourbon Theatre, I'm super jazzed for Zakk Wylde on Aug 11.  The man is a virtuoso on guitar and excellent piano player, but he specializes in metal. Then way out there in October on the 5th, we are lucky enough to have been selected for a limited date tour with Allen Stone in a 3-piece acoustic arrangement. His group has this pop-soul thing going on that I could listen to on repeat without even noticing.

It's been a blessing to work in Lincoln. The opportunity to start your own business and see it bloom was something I never imagined would work out the way it has. My partner Leah and I began this business with almost nothing. Through our hard work, determination, the raddest staff in the universe (that believed in us) and the best music scene around, we grew it into something that the whole town could utilize as their canvas and as a profitable business. Since then we've taken on some talented partners that saw our hard work and the value of what we had created. The Bourbon hasn't hit its peak yet. Our new team has some amazing ideas, connections and abilities. These next few years, Lincoln is in for some great shows and pleasant surprises. 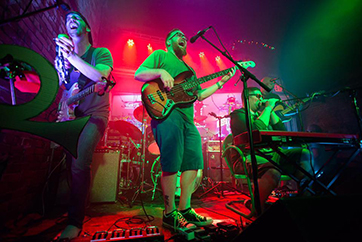 1. What are some of your favorite shows you've brought to Bodega's?

Jerry Joseph & The Jackmormans, Ignatius Reilly, Na'an Stop, Skydyed, David Gans, Dynohunter, Tatanka, and Soap were a few of my favorite touring acts to come through so far.  But there are also a ton of great local bands such as A Ferocious Jungle Cat, Ro Hempel Band, Jack Hotel, Lazerwolfe, and the Jerry Pranksters who I also enjoy. I'm a jamband fan, so I mostly stick to rock, funk, reggae and bluegrass.

That's a tough question. We're a very small venue so it limits my wish list considerably but I'd love to see bands like Spafford, Tauk, The Werks, Stick Figure, Bloodkin, Lettuce or Greensky Bluegrass play a very intimate show at Bodega's.

3. What shows or exciting events are coming up at Bodega's?

We've got a few things in the works for this fall. Na'an Stop, from Boulder who are so incredibly talented, and a great group of guys, are coming back September 17.  We are also very excited for Lincoln Calling.

Lincoln has an incredible music scene and so many great local bands and I'm very happy to be included and help it grow.  Get out of the house and go see live music! I'm very grateful for all of the venue owners downtown who have been nothing but supportive in bringing more music downtown. I also have some great friends at Rad Kaddilac and HLN who have sent some awesome shows my way and Lincoln is lucky to have them. Sometimes more than the music itself is the people you meet through a similar interest or connection that make the most impact. Some of my closest friends today I've met from various shows at Bodegas. I'm forever grateful to Brenton Neville with Vessel Live. I hired him to bring in sound for our first big show with Jerry Joseph and afterwards we slowly started talking audio tech and what route I was going to take with Bodega's sound. We have become great friends through the course of building my system and he and his Vessel crew are a tremendous asset to the Lincoln music scene.