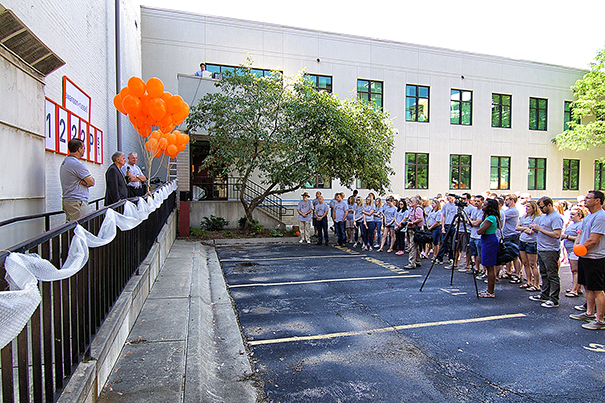 Some local businesses announced new headquarters, while new businesses introduced themselves to the community.

Swanson Russell also celebrated, but for a different reason than most.

The ad agency announced their “Super Big Non-Move,” an event which announced plans to expand their current location and stressed the importance of remaining in the downtown community.

To celebrate the news, each employee received an invitation to a groundbreaking ceremony, a commemorative t-shirt and were invited to a reception on the parking lot (the future site of the addition) featuring NitroBurger, drinks and cupcakes.

Mayor Chris Beutler, members of City Council and the Chamber of Commerce were also present at the groundbreaking.

“Being in a downtown location is important to us on several fronts,” said Brian Boesche, partner and chief creative officer at the company. “Our employees like being part of the downtown community and having access to all of the local restaurants and watering holes. We have a number of clients come to Lincoln from outside the state each year and it’s important that they see what the business community of Lincoln has to offer, as well as close proximity to hotels, the Haymarket and other social establishments. We also like being close to the UNL campus as we draw many of our employees and interns from the University.” 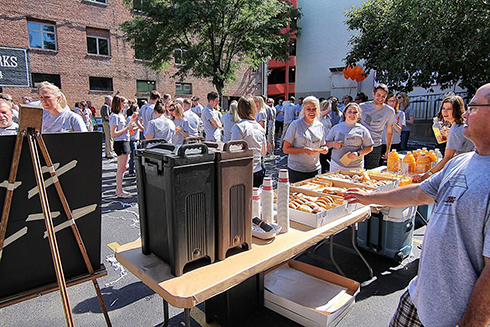 Since the June 19 groundbreaking ceremony, CEO and partner Dave Hansen said construction has been on schedule. He said he expects to be done with work on thefoundation and bearings in the next three to four weeks, with an overall expected completion date of May 1, 2016.

“Our new building is really about better and more efficient use of space rather than sheer size,” Boesche said. “As our business has evolved we wanted to have the ability for our different areas of discipline to collaborate more and to be more integrated.”

“We generally do very well in the annual Telly competition and last year was no exception,” Boesche said. “Producing great work is a team effort among our staff, our production partners and our client marketing teams. While winning awards is never our primary goal, it’s certainly nice to be recognized for the work that we do.”

As day-to-day business continues in the office, and although no major disruptions have taken place with major construction next door, the buzz of the future building is still felt by employees.

“We’re just looking forward to getting the building done and utilizing our new space,” Hansen said. “We think the future will be very bright on the corner of 12th & P.”