The rebranded coworking space is going public and giving back 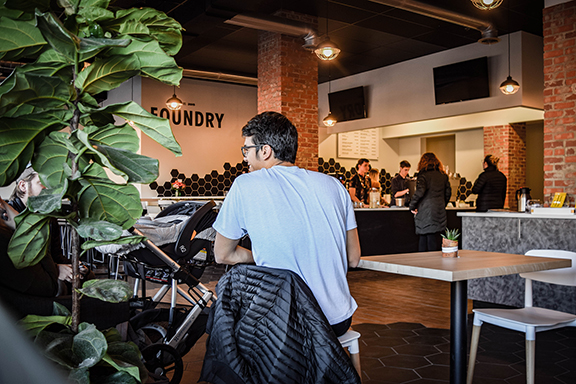 Hang around executive director Randy Hawthorne at the new Foundry coffeehouse for five minutes, and he’ll have run into at least three people he knows.

Sitting in a chair by the window, he’ll wave to you before you even set foot in the place.

Building connections is second nature to Hawthorne, who has long been involved in marketing and community building in Lincoln. To him, it’s the driving force behind the new public meeting space and coffee bar attached to the Foundry coworking space on 14th street.

“The first weekend we were open, tables just kept getting shoved together and people just kept coming from different parts of my life and getting to know each other, it's really kind of funny,” Hawthorne said.

Along with coffee, the Foundry menu is centered around shareable snacks, like Charcuterie boards. During the busy first opening weeks of the coffee shop, Hawthorne brought one out to try.

“We had three different tables and I said ‘Hey, everyone come try this,’" he said. “And pretty soon they were all talking with each other and sharing food.”

Previously called Nonprofit Hub, the coworking space opened in 2015 and was born out of Hawthorne’s online resource for helping new nonprofits get on their feet.

When Goodscents moved out of the retail location in the Nonprofit Hub building, Hawthorne’s team decided it was time for a name change to be more inclusive of the community they wanted to attract with the addition of a public coffee bar. 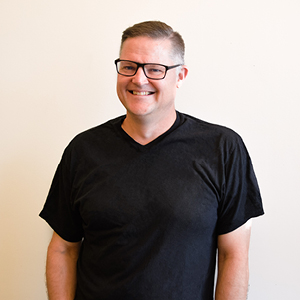 “The reason why we're called the Foundry is if you go to foundries, most of them aren't making a finished product,” Hawthorne said. “They are creating something to send on to the next place, to do something more. And so that's kind of our notion here. This is a place where you can kind of start formulating what you are going to do next. It’s a starting point for the next place on your journey.”

Online, Nonprofit Hub still has a national audience, with around 40,000 emails going out every week to people with nonprofits all over the world. Its staff works in the upstairs Foundry coworking space along with other nonprofits consisting of small teams or individuals.

“I think that the notion of coworking is going to continue to grow as even larger companies are allowing remote workers, and even wanting remote workers, because they don't want the overhead of having a building,” Hawthorne said. “It's cheaper for them to pay for you to be in a coworking space.”

Hawthorne said the Foundry is in good company with the other coworking spaces that opened in Lincoln at around the same time, like Fuse in the Haymarket and Turbine Flats at 21st and Y streets.

“If someone comes to me, sometimes I say, 'you know what, your company would be so much better suited by the community that Fuse is building because of the types of businesses that are attracted to Fuse as opposed to the cause-based things that are happening here,’” Hawthorne said. “And the funny thing is that the people that have outgrown us will typically end up at Turbine Flats, because of the nature of their space being more suite-like. So we're all very well-connected and interconnected.”

Attaching a coffee shop to the coworking space was an amoebae of a process, Hawthorne said.

One of the biggest draws was that it’s an earned income opportunity for the coworking space, so membership rates can remain low. Another was that early on, the Foundry board decided that the coffee bar would be 100% give back.

“Once that we take care of that membership fee that we need to have on the space, we're able to give back through our Founders group, which are the people that helped give us the donations to get the place started,” Hawthorne said. “They're going to be able to choose the other nonprofits that get our excess revenue from this organization. I hope that we get to the point that it's in the thousands every month, and that we're really helping our community in that way.”

However, the Foundry wants to be clear that they’re not just opening a coffee shop—that’s not the purpose.

“Our purpose is building a space to create connections,” Hawthorne said. “I know that can happen at other coffee shops, but this brand is not just a coffee shop, it's a lifestyle. You do not have to be a part of the coworking space to work here. It’s everyone’s living room, so to speak. This space will never be silent.” 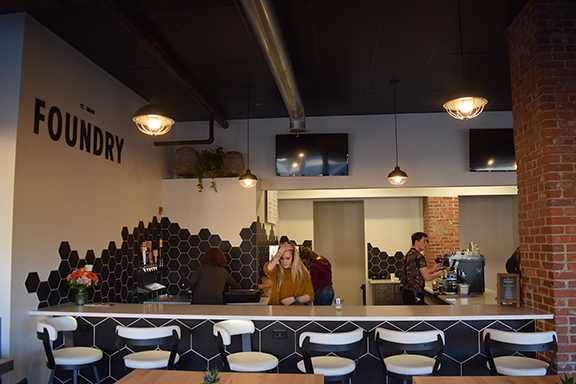 The opening of the coffee bar has already led to tours of the coworking space from people who have come in and said they’ve been working from their living room.

“That's part of the problem that we've had in the past about coworking and nonprofits,” Hawthorne said. “You don't know that they're working in their living room. There's no list of ‘People Working on Nonprofits in Their Living Room.’ There's no mailing list for that. So this kind of exposes us more to a community that is working from their living room tables.”

Hawthorne said there is a lot to be said about being around a community rather than isolating yourself working from home.

“One of the things that has come to light more and more, it's kind of weird, you start hearing it from a number of different angles—human capital and humanity and having human connection is going to be the major selling point in this next generation of workers,” he said. “If you build a good human capital—yeah, school is great for getting to know things and developing a skill—but human connections are some of the most important things that you can take from experiences now. So I think having a space like this is so cool and it's part of that ecosystem of building human connections. I love the whole notion of community in this space.”