The Hope Venture is Challenging Lincoln to Make a Difference


For ten years, this non-profit based in downtown Lincoln has been raising thousands of dollars to support people living in poverty overseas. Find out how you can help, too. 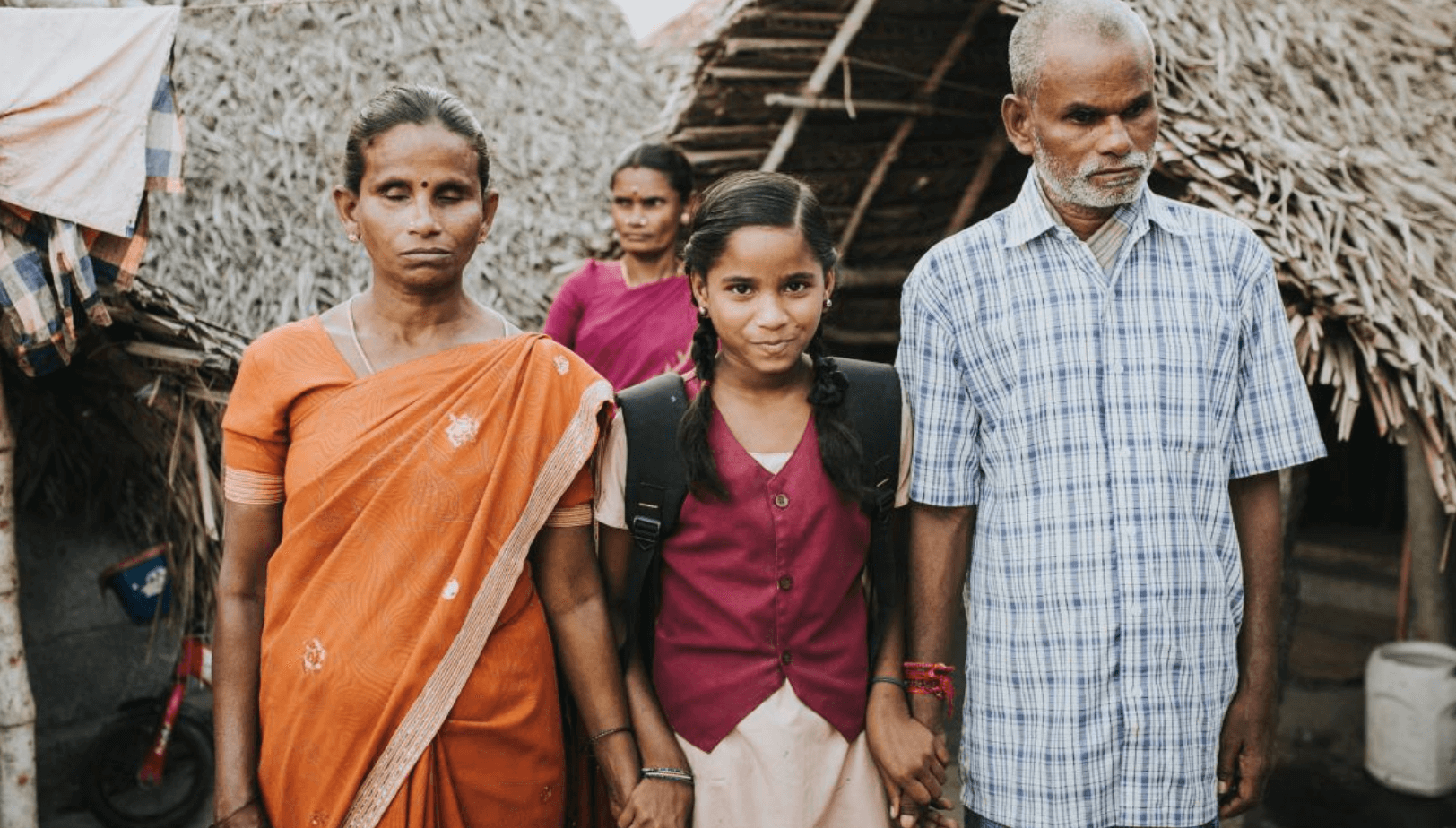 Cynci Petersen was on a mission trip in India when she noticed a mother of three take her kids out to a dirty puddle just to get some water to drink.

Surrounded by poverty and need, this was an unforgettable moment for her that would change the course of her life -- she was a mother of four young boys at the time, and it hit home.

“I was broken to see her taking three kids out there and knowing one of them could die from that, one could get sick -- maybe one has already died, I don’t know her story,” Petersen said. “I live in a country that has a lot of resources and I realized that I could maybe mobilize some things.”

Petersen came back to Lincoln and began what would become The Hope Venture, a non-profit organization that seeks to help the most disadvantaged communities in India, Kenya, and Uganda. The Hope Venture raises donations and finds volunteers to help with projects that range from sponsoring students to providing resources ranging from vocational education to health and wellness support for people living in poverty. 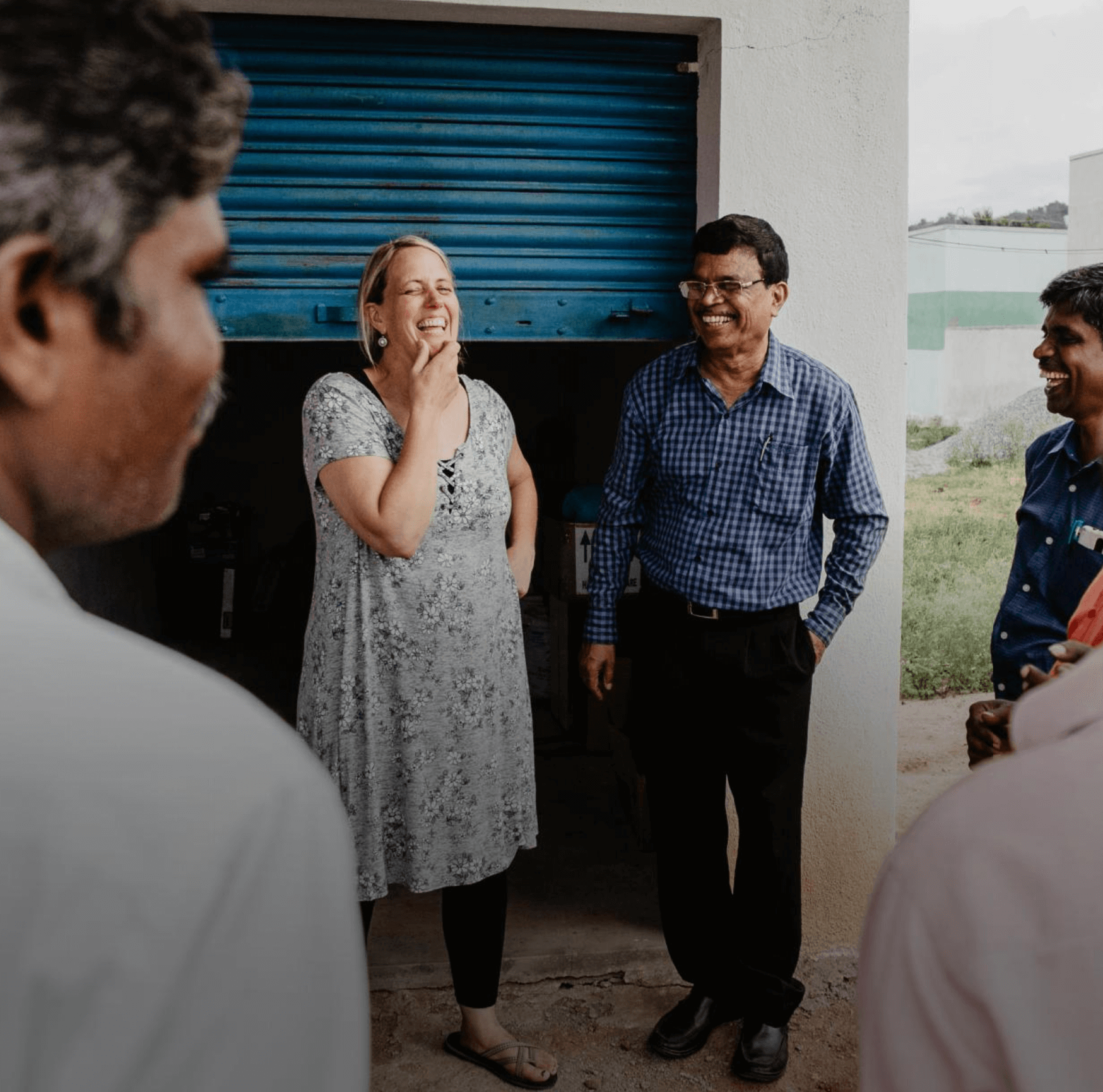 Petersen’s organization started in a basement in 2009 but grew into its current office space in the Peanut Butter Factory at 15th and South 9th street in downtown Lincoln five years ago.

By the time Petersen began The Hope Venture, she and her husband were already frequently volunteering overseas in impoverished areas and building relationships with organizations that The Hope Venture would partner with in the future.

Petersen said she felt compelled to begin her overseas work because of a growing desire to care about people around the world.

“I'm a Christian, and I feel like we're called to love everybody in the whole world, and there's a lot of people that don't have the same resources that we do and the same opportunities that we do,” she said. “The places we travel to are some of the largest slums in the world. I've never seen anything like it here in the states.”

The Hope Venture has worked with the same partners overseas since the organization began ten years ago. Petersen knew from the beginning that trust and consistency would be paramount to creating a non-profit that would effect change in communities outside of the U.S.

“Trust is a big deal,” Petersen said. “In the states a lot of people want to help but we're not there all the time. If you don't help in the right place you can be harming what's happening over there. I don't want to come in as some white American who thinks I know how to change India. So we work with trusted people that we know well, they know their country the best and we just come alongside as partners in that.”

The work that The Hope Venture does in India, Kenya, and Uganda are varied projects. 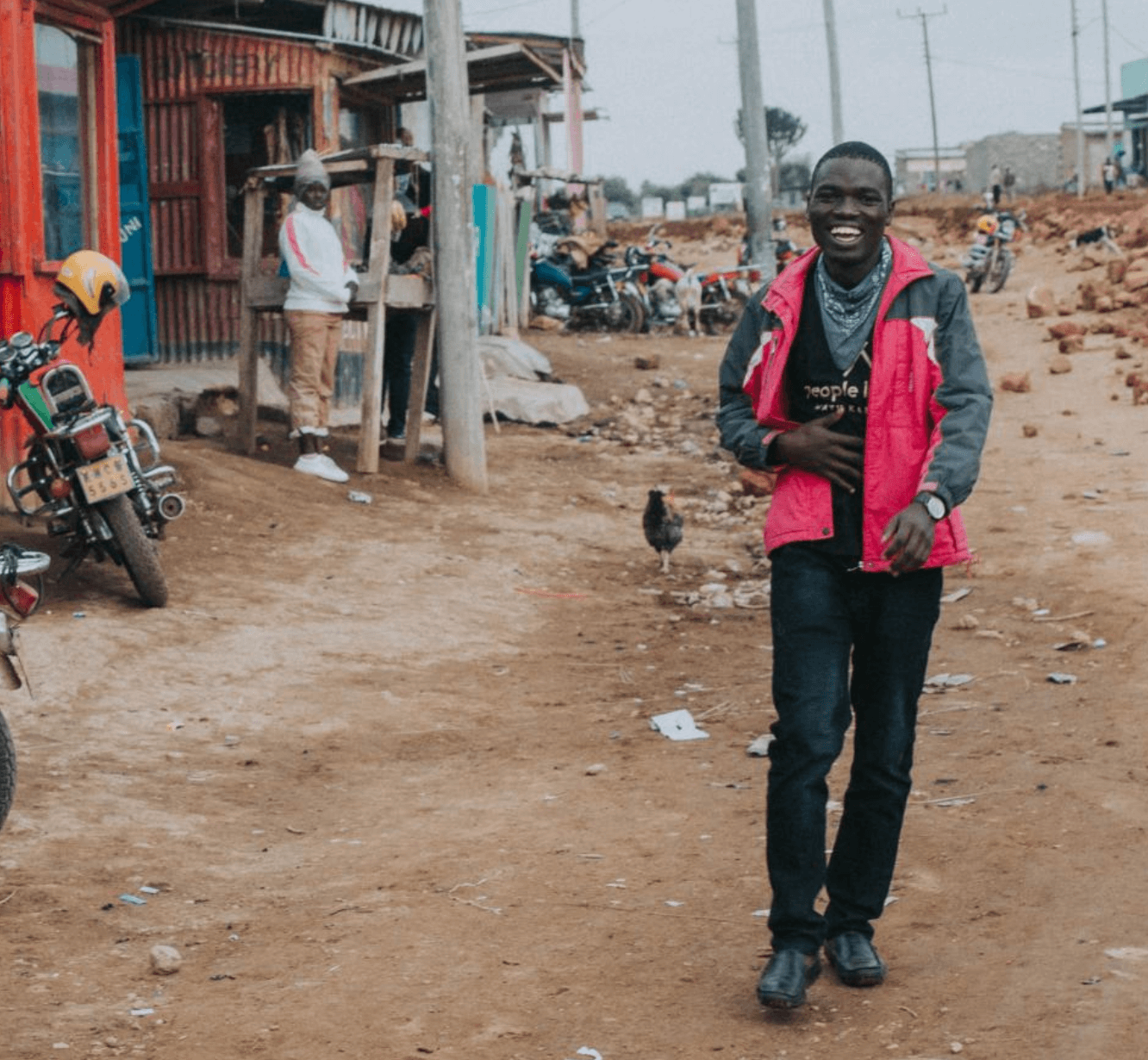 During a yearly trip to Kenya, about 20 volunteers run a camp to interact and work with students, many that have been sponsored by The Hope Venture. A student sponsorship (only $50 a month) provides housing, food, education, counseling, and support for one high school student in Kenya. Many of the sponsored students have graduated and want to go to college, so The Hope Venture works to make that a reality for them.

“I’ve known some of those kids now for eight or nine years, and that’s pretty amazing to watch them grow,” Petersen said. “There's a kid named Abraham who is from the largest slum in the world in Kenya, and he's watched his friends die from drugs and from gang related violence. He says he would be dead if it weren't for the Hope Venture. He thanks me and calls me his ‘mum.’ It's pretty humbling to think that, wow, this kid really does have a different story and a different journey.”

Another project in Kenya provides goats to families experiencing poverty in drought-ridden areas. Since the goats feed off of leaves, they’re able to survive during times of drought while providing milk for children susceptible to malnutrition, and the goats’ offspring can provide even more milk that the family is able to sell.

In Uganda, The Hope Venture partners with vocational training centers for tailoring, small-scale agriculture, and computers to empower women and children. The tailoring courses are offered to women who are oppressed within India's sociocultural environment, and the agriculture training is for young mothers and  survivors of sexual abuse.

Another project in Uganda works to provide expecting mothers with “Mama Kits” to ensure a safe and clean delivery. 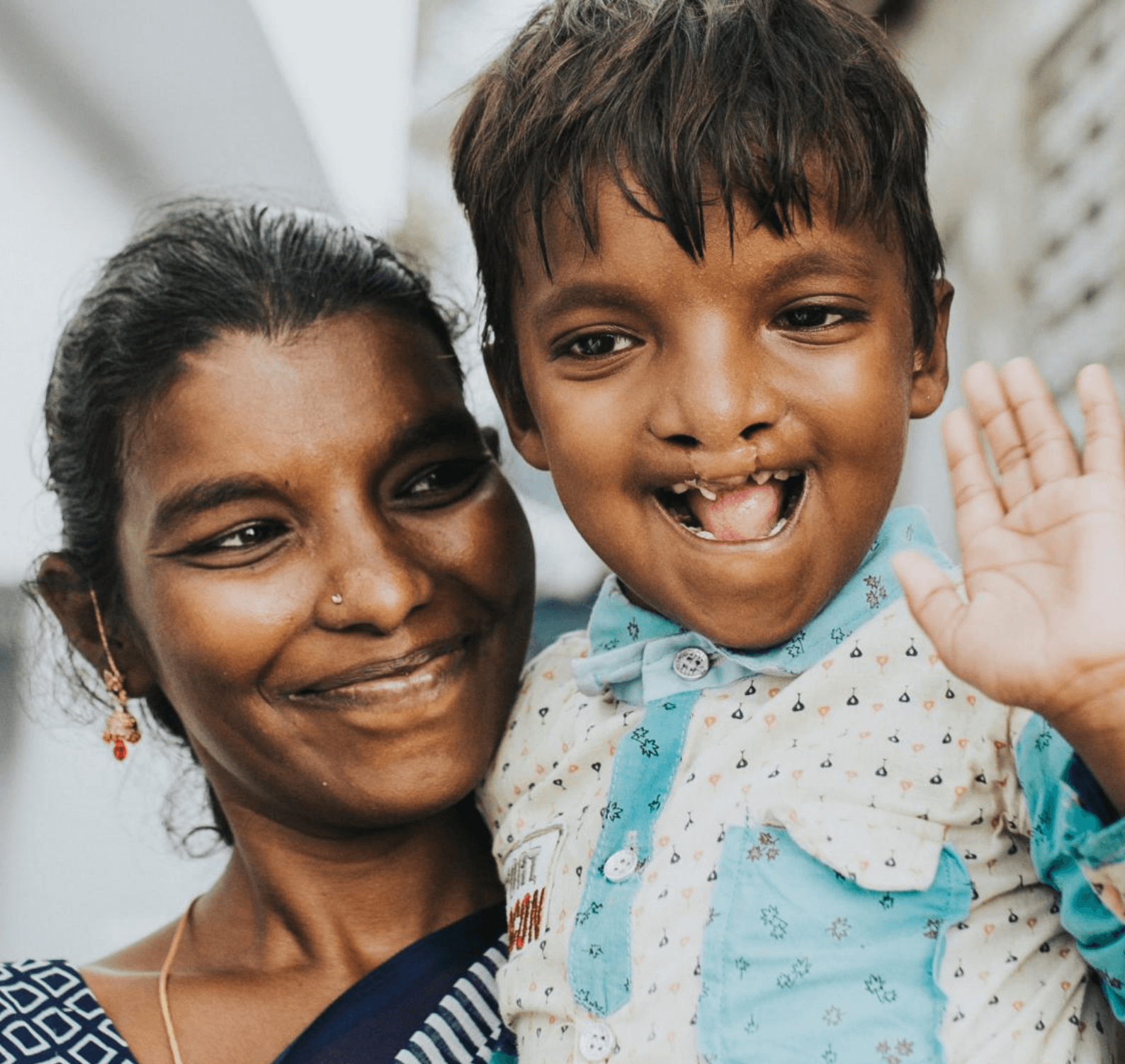 In India, The Hope Venture follows up with multiple projects during mission trips. Working with several feeding centers, donations are raised to feed children who come in everyday for a meal and community interaction. The Hope Venture also runs two schools in the slums of Delhi, helps with one school in Eastern India, and are in the building process of a K-12 school in Northern India. To support those living with mental and physical disabilities, The Hope Venture also partners with Home of Hope, a place that provides people with a safe place to live and find medical treatment and care. Back home, Petersen and the team urge people to donate just $24 to provide the medicine needed for one person for a whole year.

Katie Horan, now Director of Donor Relations at The Hope Venture, was introduced to the organization when her church partnered with The Hope Venture during a mission trip. 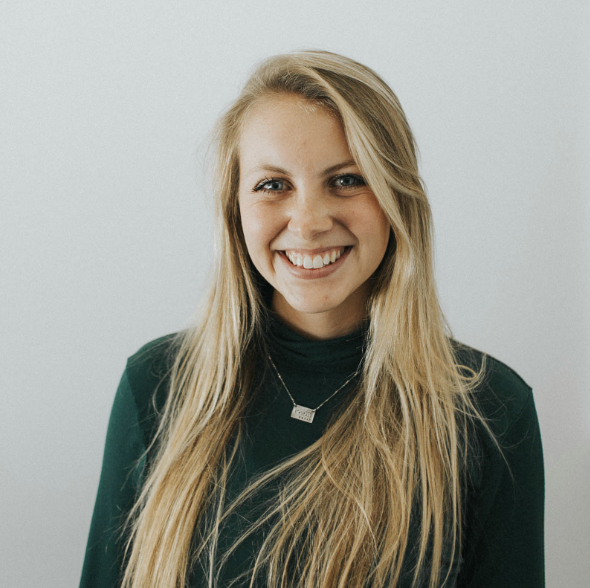 Katie Horan, Director of Donor Relations at The Hope Venture

It was her first time out of the country, and her group was flown straight into Mumbai -- home to 12 million people living in urban poverty.

“When we got there it was downpouring,” Horan said. “Water was pouring into homes, and people had nothing they could do. And their homes were just maybe a room. The shell shock of it all made me numb for a day. I think seeing that there is such a need there, I don't think I really understood that until it was put in front of my face. There's something different about seeing it in a picture where I'm away from it. But when I'm surrounded by it and I can't turn away.”

Upon her arrival back home, Horan said joining the staff at The Hope Venture was a way to not forget the poverty she experienced overseas.

“The first thing I realized when I got home is that you have to continue to choose to care,” she said. “I always thought, I saw that poverty and it will never go away in my mind. But you can get acclimated to your life again and just forget about what is happening in other places. You have to continue to choose to put yourself in those situations. And so I think that changed a lot for me, I learned not to just look away from injustice. I applied for this job out of this thought that I'm going to work 40 hours out of my week, and I want to give that time to something I care about.”

Petersen said she wants to encourage anyone to make a difference with their life, no matter their age, occupation, or stage in life.

“It's never perfect -- the timing never perfectly fits together, that all the pieces are right so ‘now, I can make a difference,’” she said. “Right now, make a difference in your life, whether that's to your neighbor, or whether that's taking a trip with us, or whether it's just calling your mother back. Whatever it is, learn how to be a person that brings good into this world, because it makes a difference. We have so much opportunity. If you're reading this article in Lincoln, Nebraska, you have some privilege that a lot of people don't have. What are you going to do with that?”

Ten years ago, Petersen said she had no idea where The Hope Venture would go.

“We don't know everything about our lives ahead of time, and the Hope Venture is a great example of it just unfolding and a lot of people coming together,” she said. “Not because one of us had all the means. We say we're a group of toothless third graders, and soccer moms, and retired hotel owners, and the whole gamut. We've seen any age and any means make a difference.”

There are plenty of ways to make a difference through The Hope Venture. Simply make a donation to one of their many projects. Businesses can sponsor a Hope Venture fundraising event such as the Night for Hope and the Run for Hope. You can apply to be a part of an overseas trip. Even just joining the volunteer mailing list to help out sending mailers for a few hours every month is a great way to get involved.

The Hope Venture runs on a “100% Model,” so 100% of donations go directly to programs overseas. Because of this, a Backbone Team supports The Hope Venture’s ability to use an office space and pay a small team of employees. You can donate to that, too.

“People who are wanting to figure out what to do with their life -- then do it well,” Petersen said. “Make a difference with your life. Make the most of the hours you have. Because you do have hours and you do have opportunity. You have training and education, you have so much poured into you. So pour it out. Find ways.”