The home of the Huskers since 1923 and the location of a continuing NCAA-record consecutive sellout streak that reached 325 games in 2012, Memorial Stadium provides one of the most exciting game-day experiences in all of college football.

In the fall of 1922, a drive for $430,000 in stadium construction funds was undertaken by faculty, students, alumni and friends of the University of Nebraska. The quota was over subscribed. The stadium was named Memorial Stadium to honor all Nebraskans who served in the Civil and Spanish-American Wars; the 751 Nebraskans who died in World War I; the 3,839 in World War II; the 225 in Korea; and the 422 in Vietnam. Construction was completed in a few more than 90 working days and Memorial Stadium was dedicated on Oct. 20, 1923, at the Homecoming game in which Nebraska was held to a scoreless tie by Kansas.

The stadium underwent dramatic changes in the 2006 campaign, with the addition of more than 6,500 seats in the North Stadium, bringing the historic stadium's capacity to 81,067.  The impressive changes, including one of the largest in-stadium replay screens in the nation - have been evident on game day.

Memorial Stadium underwent some more impressive changes in the summer of 2009, with the addition of two new HuskerVision replay boards and a ribbon board running across the overhang of both the east and west sides of the stadium. The additions will add to the already electric atmosphere inside Memorial Stadium on game day.

As part of the expansion, Memorial Stadium gained a glorious new North end with the addition of the Osborne Athletic Complex.  The cutting edge project not only included a new home for Nebraska football, as the coaches' offices and player locker room moved from the South Stadium to the North Stadium, it also included the Charles and Romona Myers Performance Center.  The new performance area provides every one of Nebraska's more than 600 student-athletes all the elements to maximize their performance, including a new strength complex, athletic medicine center, hydrotherapy pools, and nutrition center, all on one level.

The project also included the Hawks Championship Center, which features a 120-yard field with an identical FieldTurf surface to the game-day surface in Memorial Stadium, giving the Huskers a second indoor practice area across the outdoor grass practice fields from Cook Pavilion.  The Hawks Championship Center is connected by a skybridge to the Osborne Athletic Complex.

In all, the $50 million project provides an unmatched practice and game-day atmosphere for student-athletes and fans at Memorial Stadium.

In April of 2011 the University of Nebraska began construction expanding the East Stadium of Memorial Stadium. When construction is complete in 2013 East Stadium will be roughly twice as tall as it originally was, accommodate more than 6,000 extra fans with 38 additional suites, and house the Nebraska Athletic Performance Lab.

With expanded capacity now reaching beyond 85,000, Nebraska has continued its NCAA-record streak of consecutive sellouts that dates back to 1962 and is at 333 games entering the 2014 season.

Inscribed on the four corners of the stadium are the following words, written by former UNL professor of philosophy Hartley Burr Alexander:

Southeast: "In Commemoration of the men of Nebraska who served and fell in the Nations Wars."
Southwest: "Not the victory but the action; Not the goal but the game; In the deed the glory."
Northwest: "Courage; Generosity; Fairness; Honor; In these are the true awards of manly sport."
Northeast: "Their Lives they held their countrys trust; They kept its faith; They died its heroes." 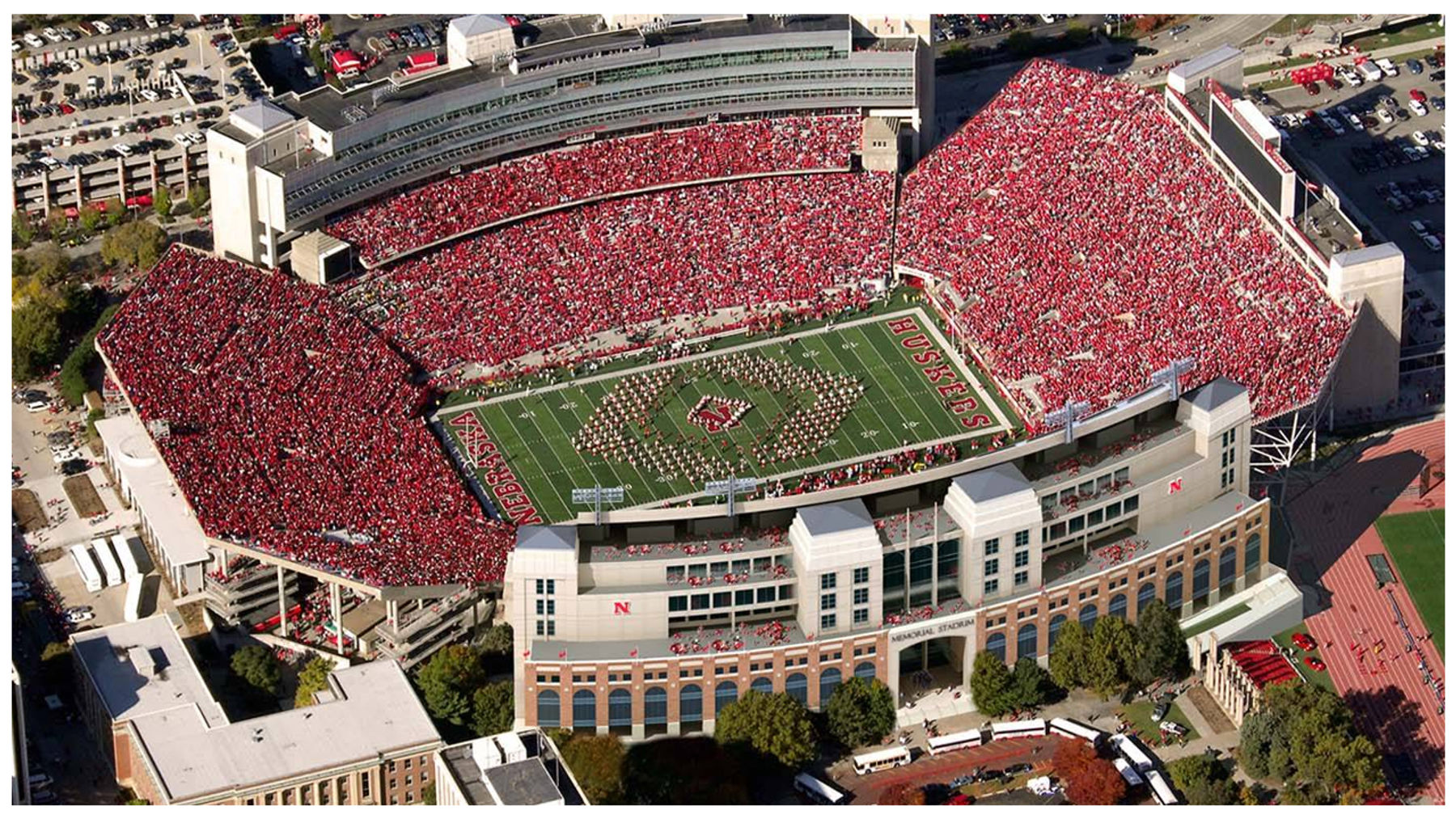