Exclusive Hype is changing the scope of retail in downtown Lincoln. 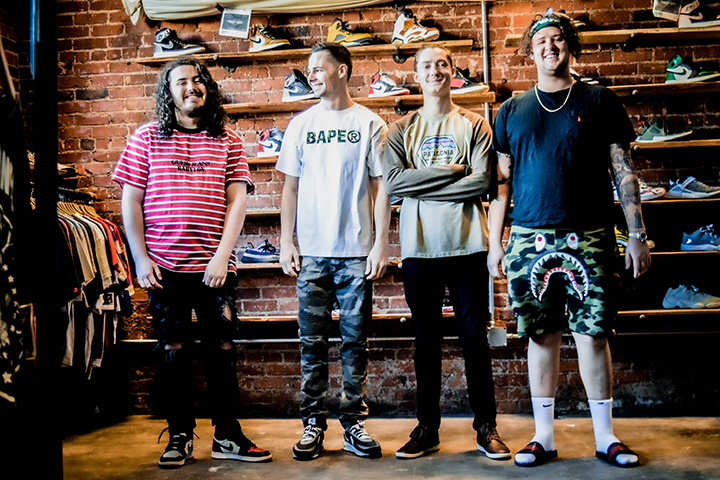 At downtown Lincoln’s newest vintage streetwear store on O street, “look good, feel good” is a phrase to live by.

Exclusive Hype began as a way for a group of friends to share their love of sneakers and t-shirts from the 80s, 90s, and early 2000s with the Lincoln community.

Lincoln Southeast graduates Hunter Shannon, Garrett Atkinson, Tabor Morton, and Keenan Haberlan grew up together and developed a passion for pop culture, sports, skateboarding, and the material culture and fashion that came with it.

“We’re looking for the gold,” Shannon said. “The thrift gold. It’s more luck than anything”

Over time, they learned how to spot a fake label and how to tell if a t-shirt is truly a vintage gem (for instance, if the shirt is made with a “single stitch” instead of the two lines of stitching that is made today, it means you’ve hit the jackpot.)

Shannon has found sneakers a few times for just over $100 that were worth closer to $1000.

“We've just been collecting ever since we were kids, honestly,” Atkinson said. “It kind of turned into a huge collection and then we were sitting back looking at it, and we were like, man, this stuff is worth some money.” 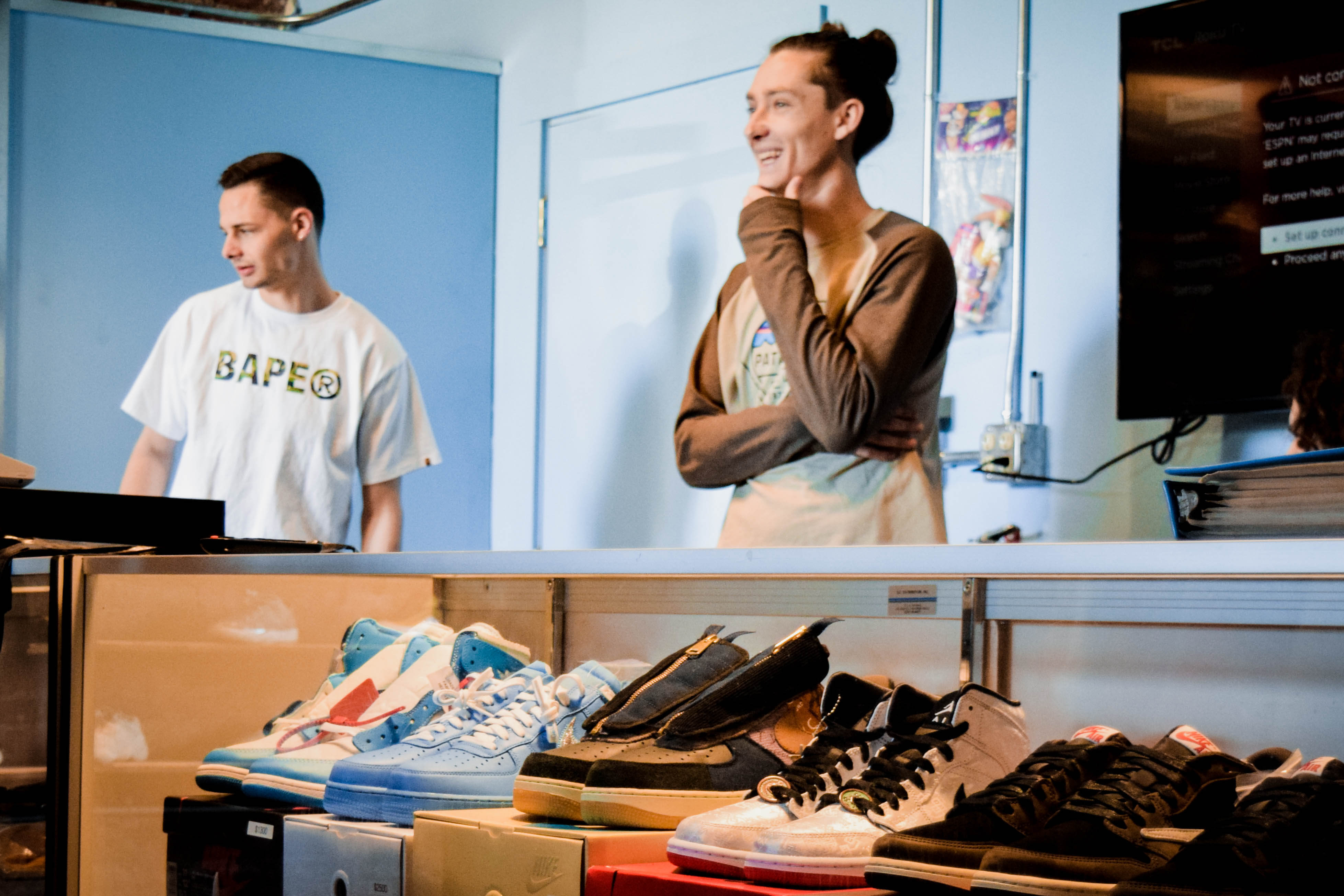 Not only had their vintage finds held their value, but they’d gone up over time.

In the past five years, similar vintage streetwear stores in larger cities have gained notoriety while 80s and 90s nostalgia and hunting for vintage labels is having its heyday.

The four childhood friends began selling through Facebook groups dedicated to vintage and their Instagram page, @exclusivehypelincoln, while also setting up pop-up booths at events like Lincoln Calling.

When Shannon’s father (Andrew Shannon of Shannon Formal Wear) decided to move his business from the Gateway Mall to the former Spigot location at 1630 O Street, Exclusive Hype saw it as an opportunity to take their online-only collection to a brick and mortar location.

With the help of any friends that could lend a hand, Shannon, Atkinson, Morton, and Haberlan worked for eight months to transform the back of the building into their now vintage shop. The front of the former O street bar will soon be filled with Shannon Formalwear’s men’s tailoring and tuxedo rentals while Exclusive Hype’s racks of vintage tees and sneakers reside in the back.

“We redid the entire building,” Morton said. “The walls were grout, they weren't brick at all. It was a process.”

You can access the shop from the front entrance and walk to the back of the building, but once current construction clears up in the back alleyway, they hope to utilize the back entrance. 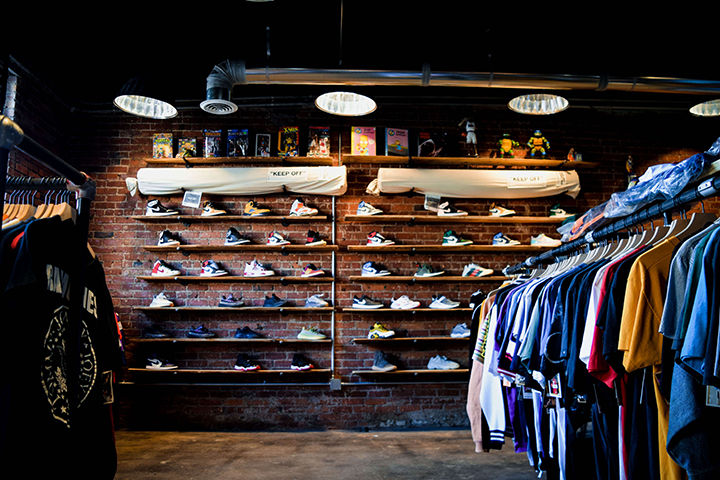 After a successful grand opening on February 8, Exclusive Hype is excited for the future of the store. They are one of the first to open a high-end, curated streetwear store in Lincoln.

“We thought it was time to bring it,” Shannon said. “It seemed like there were a lot of people who were ready for it at the grand opening. I was surprised how many people were into it. Everybody's brought their collections in and tried trading and all that stuff. It's been fun.”

They’ve been surprised by the variety of age groups stopping in to the store, too.

A popular Youtube series following the day-to-day of Round Two Vintage in Richmond, Virginia put the art of buying and selling vintage streetwear on a mainstream radar. The store has since expanded to Los Angeles, New York City, and Chicago and is frequented by mega hip-hop artists like Lil Yachty and Travis Scott.

Just like Exclusive Hype, Round Two had humble beginnings as a group of friends selling only online before they were able to open their first store in Virginia.

“I feel like a lot of people already knew what kind of clothing we were looking for because they watched those shows,” Atkinson said. “They know about the value of the clothes and what we look for.”

Still, they’ve seen some shocked parents looking at the pricetag of $350 pairs of sneakers.

“But they're not just a pair of shoes to us, they're more like art,” Atkinson said. “They're hard to find and there's a set number on all of them. It drives the price up.”

They’re hoping to teach a younger generation about making smart investments in their clothing, and taking care of their purchases.

“If you’re investing in more expensive clothing, you can always trade it or get that money back,” Atkinson said. “It holds its value.”

Unlike “fast fashion,” where retailers like H&M sell $20 shirts only to end up in a landfill, vintage shopping is sustainable. 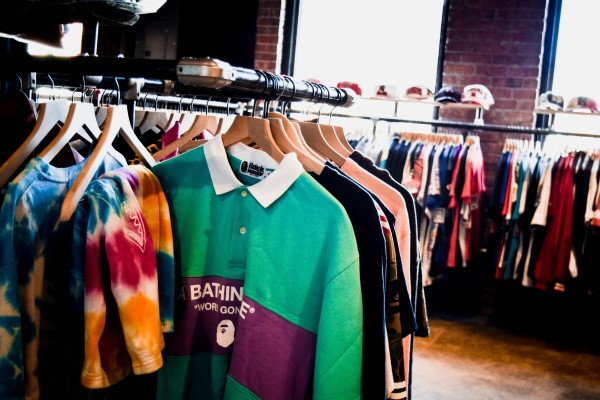 If you’re hoping to sell or trade at Exclusive Hype, the store is always on the lookout for older, single stitch t-shirts, higher end labels, and vintage Husker wear.

Even a pair of used Jordan sneakers can be worth money if they’ve been taken care of.

This coming year, Exclusive Hype is focused on growing the community and reaching a wider audience.

“We're mainly just trying to get our name out there,” Atkinson said. “We feel like there's enough people in Lincoln interested, and this should have happened a long time ago. Nobody took advantage of it.”

Facebook buy/sell/trade groups come and go, and lots of large-scale apps have taken vintage selling to a corporate level. The guys behind Exclusive Hype encourage you to keep it local.

In the meantime, they’ll keep scouting the best vintage pieces for their downtown Lincoln shop, like the Linkin Park band tee Atkinson found for $7 that’s autographed by the whole band, or Morton’s most notable find: an original Nirvana tee.

“I found that from somebody who wanted $100 for it,” Morton said. “I looked it up online, and it's nearly impossible to find, and just priceless, to be honest. It's my grail, for sure.”