The Burkholder Project is an essential part of Lincoln’s Historic Haymarket. Anne Burkholder always had the goal of starting a space where artists could display their work and have a space to create. The Burkholder’s Project holds art of all kinds, from jewelry makers to oil painters occupying the space. Standing since 1987 when Anne Burkholder purchased the building that was once an old carpet factory. The art gallery residing next door to the Creamery building has been there for 35 years.

Owner Anne Burkholder recalls coming across the building that is now The Burkholder Project.

“Nothing was down here, nothing,” Burkholder said. “Deserted warehouse and buildings and that was it. And so I thought, ‘well, okay that'll be a good destination, you will have to go out of your way to get down here, next to nothing else was going on here. And so today, 35 years later, it’s hard to find a parking place!”

The Burkholder Project has hosted an eccentric collection of 36 art and design studios with New York-style lofts and apartments and three levels of galleries.

“[The apartments] are open and big windows in the building,” Burkholder said. “People have come and gone and the apartments were really easy to rent. People like the idea of living in an art gallery environment and they weren’t necessarily artists first either.”

Now a handful of artists that showcase their art in the gallery live upstairs.

Located on 7th and P Street, the Burkholder Project was where Lincoln had it’s first First Friday Gallery Walk.

“Probably about 34 years ago, I decided that it would be really nice to have an art walk,” Burkholder said. “So I started First Friday and the first couple of years we did a lot of promotion about it and now look at us.”

Burkholder has received a lot of accomplishments for her commitment to the Lincoln Art Scene. 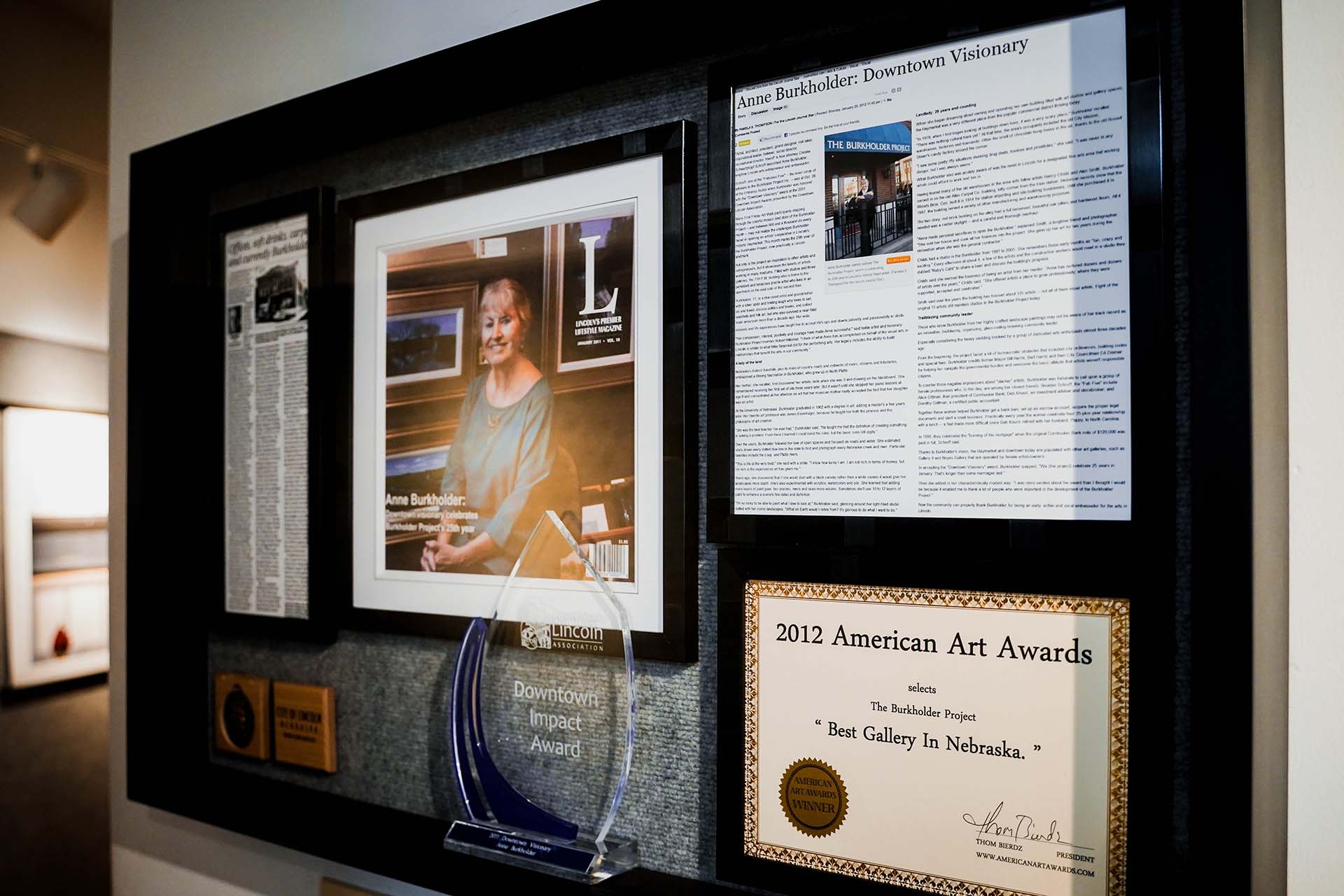 In 1997 she received the City Center Award from the Preservation Association of Lincoln for her commitment to historic preservation and revitalization of our community's historic origins and investment in our community's future. She was awarded the Community Improvement Recognition Award in 1988 and 2001 for her work with the Burkholder Project.

In 1988, Anne Burkholder was awarded the Helen Haggie Award as part of the Tenth Annual Mayor’s Art Awards. The Burkholder Project have also received an American Art Award as the Best Gallery in Nebraska in 2012 and 2013.

Burkholder wanted a space where artists could set up shop. Burkholder made the decision to not make the gallery a commercial art gallery. She wanted to hold a community for artists who excels at their craft.

“This is really, truly, a community and there’s a lot of interaction with the artists here,” Burkholder said. “Mostly because we have a really strong ongoing group of artists in the building, some that have been here for more than 20 years.”

Burkholder's hand selects who showcases their art at the gallery. An artist will bring in their portfolio and Anne will check them out.

She is always looking for someone who offers something different from what Burkholder Project already offers. It does not matter what style of medium the artist works with.

“I am a messy painter, I got paint all over, and oh dear the smell,” Burkholder said. “People are painting where they can, they’re painting in their kitchen, in their attic.”

Burkholder wanted to help provide a space for the artists that paint in their apartment and didn’t have the space. She has experienced this herself and it was her goal to create something more for the Lincoln art scene.

Anne Burkholder remembers living without a studio and described it as “hard to do.” She recalls bouncing from space to space trying to find a place that worked for her. 35 years later and she has created that space for artists just like her. 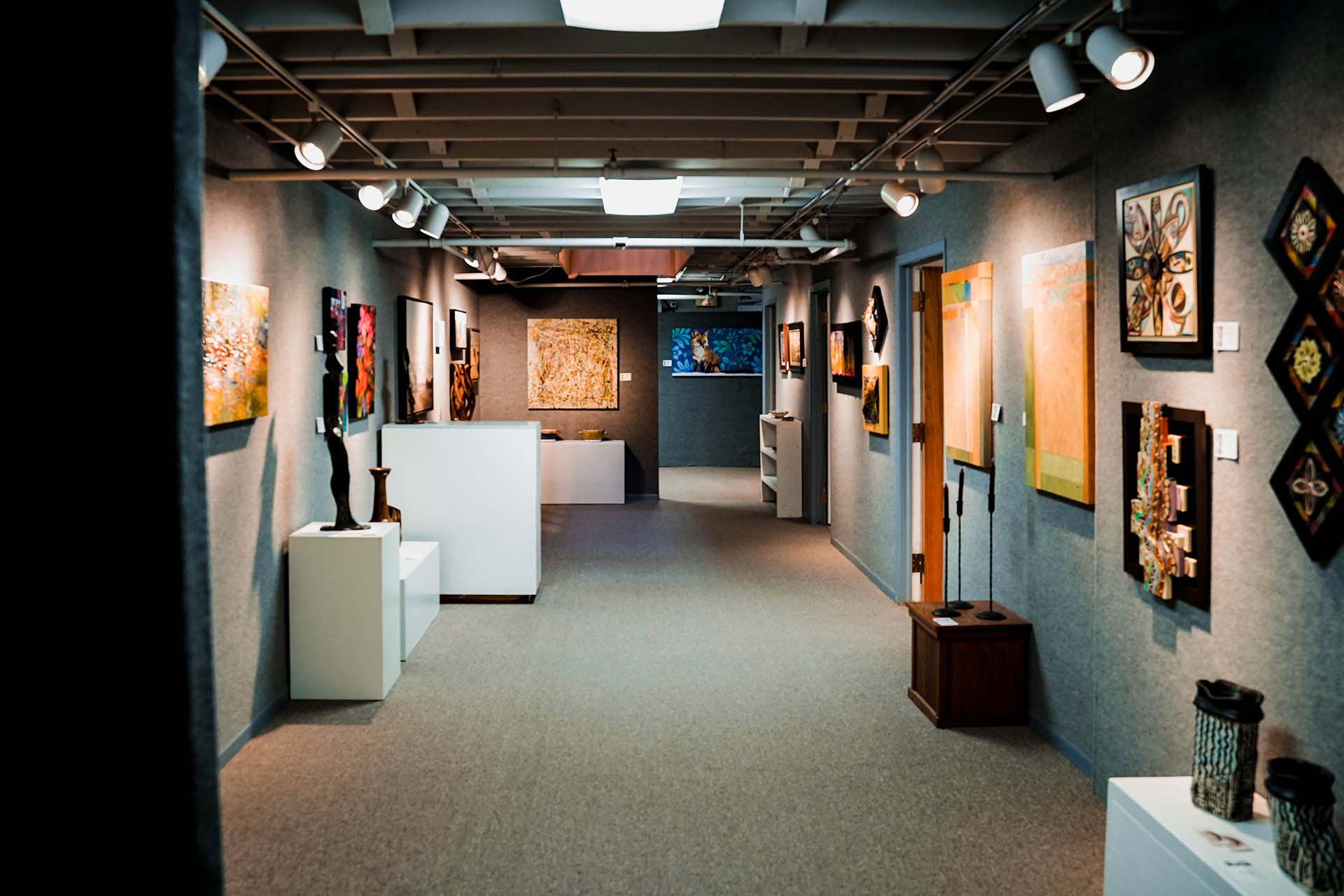 “I just had to find a different studio space,” Burkholder said. “A friend of mine offered her garage and I was going there because it would give me good natural light, but it still gets a little chilly for everyone.”

Burkholder’s medium of use is oil painting. she paints Nebraska landscapes and skies. She has been painting landscapes since she was 12 years old. Burkholder pulls inspiration from growing up in the Sandhills and traveling across the plains. She has done a series of birds that were to help raise money for the community.

“What I am looking for in a scene that I want to paint, is it needs foreground, middle ground, and background,” Burkholder said. “Most of the time I have really, really big sky things I’m working on because I think that the important thing about Nebraska landscapes is the huge skies.”

Burkholder has been an important part of the Lincoln community art scene and after 35 years, she is still heavily involved.

She also spearheaded the Gallery Alley project that now runs between The Burkholder Project and the Creamery building.

Anne Burkholder has future plans of what to add to the Haymarket’s Instagramable spot and continues to add more as long as Burkholder’s Project stands.